Yesterday, the market staged an early rally based on comments from China. They plan to let the Yuan float within a 5% range. Analysts believe that it has been artificially suppressed since 2008 when it was pegged to the dollar.

The rising Yuan would devalue the dollar, putting US companies in a more competitive position. American exports would benefit and our economy would grow. This theory makes sense, but there are negative consequences as well.

The US imports goods from China and consumers have benefited tremendously from a weak Yuan in the last decade. A rising Yuan would be inflationary. Higher prices would result in higher interest rates. This in turn would increase our nation’s cost of capital. The average maturity on our bonds is four years in any small uptick in rates will dramatically increase the interest expense on our massive national debt. Consumers will also pay higher prices at the checkout counter and they would pay higher interest rates when they borrow money.

The news did not seem worthy of a rally. Once the initial buying subsided, the market gradually drifted lower. By late afternoon, stocks headed into negative territory and we closed on the lows of the day. The market currently sits right at its 200-day moving average.

I still feel that the market can creep higher ahead of earnings season if it can get past the Unemployment Report in two weeks. The news has been rather light and traders are callous to the problems in Europe. They will keep a close eye on the bond auctions, but they don’t sense any imminent danger.

Last week, traders ignored the weak bond auction in Spain. Spain was able to raise capital, but short-term interest rates jumped 70 basis points. Initial jobless claims in the US were dismal, rising to 472,000. The market also looked past this number. Retail sales were weak and existing home sales dropped more than expected today. These bearish releases are mounting, but the market is able to tread water.

The rally has come on light volume and that indicates a low-level of commitment. Bulls are treading very cautiously and last week’s move had an artificial feel to it. Quadruple witching buy programs and short covering fueled the rally.

There is an old market adage, “Never short a quiet market.” We are heading into the summer doldrums and this could be the calm before the storm. I have been selling out of the money put credit spreads with good success. I believe these positions will expire in good shape a month from now.

By mid-July, earnings season will kick off. Stocks are likely to sell off after the company posts results. This pattern has been strong for three consecutive quarters. Each decline has been more severe and I believe support at SPY 104 will be tested in August.

This time a year ago, the recovery was underway. That means year-over-year comparisons will be tougher to beat. Corporations have not been hiring and I’m expecting cautious guidance.

It is not too early to start lining up your bearish candidates. The next decline is likely to rattle investors and Asset Managers who have been rather passive, will not aggressively bid for stocks heading into the weakest seasonal period of the year. The drop will be sustained.

Start looking for companies that sold off dramatically during the last decline. Also, look for stocks that tanked a year ago. Companies that rely on credit will be hit the hardest. Cyclical stocks will also decline if China shows any signs of a slowdown.

Generate a little income while you wait by selling put credit spreads. Take advantage of the boring action by lining up your shorts. This rally could falter at any time so be ready.

Buy puts on a close below SPY 105. One bad news event could quickly revive fear. 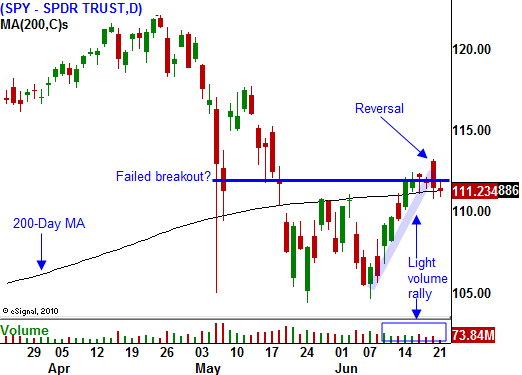