Positive Earnings and Option Expiration Should Fuel The Rally. Bears Need To Wait A Week!

The market continues to grind higher and now it is testing resistance at SPY 110. That is the downtrend that started in April and it is the 50-day moving average.

Overnight, Intel announced earnings. It posted its best numbers ever, stating that the PC and server segments are healthy and the demand for leading-edge technology will continue to increase in the foreseeable future. This news has put a bid under the entire tech sector.

Alcoa and CSX released earnings on Monday and we saw positive results in both instances. This has restored confidence and Asset Managers are putting money to work. I expect this rally to continue into next week.

The bull’s only hope for a rally rests with technology stocks. Healthcare, financials, real estate, retail and energy are all struggling. The economic news continues to disappoint and it is just a matter of time until that is reflected in corporate guidance. This morning, retail sales fell for the second consecutive month. Unemployment benefits and severance packages are running out and Americans are hanging on to their money.

On the credit watch, Portugal sold €900 million in 18-month bonds. The yield jumped 145 basis points from April and that would’ve been alarming if not for decent demand in its €800 million auction maturing in 2019. The yields there only went up 11 basis points from last month’s auction. It demonstrated that it could tap credit markets. Spanish banks gobbled up €1.25 billion in ECB loans in June. The ECB is ending that credit facility and Spain grabbed one quarter of the total pot before it was gone. This is not a particularly encouraging sign.

As long as this Ponzi scheme continues and European nations are able to borrow, the threat of a crisis will be postponed. Traders will focus on good earnings, strong balance sheets and low interest rates.

As earnings season unfolds, we will hear from cyclical stocks. I believe their guidance will be cautious and that will weigh on the market in two weeks. Furthermore, economic statistics will continue to deteriorate and fears of a double dip recession will surface.

This afternoon, the FOMC will release its statement. I am not looking for a change in their rhetoric. They will point to a fragile economic recovery and they will maintain their “dovish” policy. Tomorrow, initial jobless claims, industrial production, the Empire Index and the Philly Fed should all show signs of an economic slowdown. Normally, this would weigh on the market, but earnings from J.P. Morgan could save the day. This is one of the nation’s strongest banks and results should be good. Traders will also look to Google, Bank of America, Citigroup and General Electric for good earnings news. They will all announce before Friday’s open.

The market started off on a negative note this morning when retail sales were released. Since then, we have gradually been marching higher. This is the type of price action that will spark option expiration buy programs. We are likely to grind higher into the close today.

I am waiting for signs of resistance and I will start scaling into the positions that expire in September, October and November when I see it. I will be buying out of the money puts if the VIX falls to the low 20’s. Be patient and start lining up your shorts. 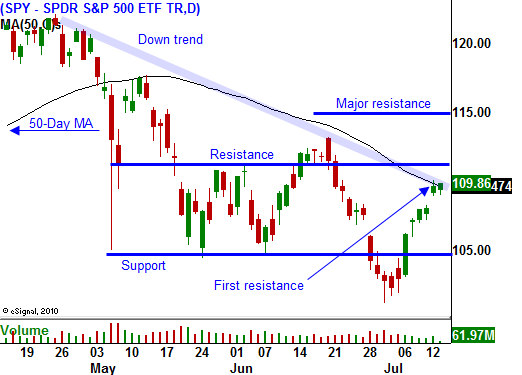