Yesterday, the market tanked on weak economic news from China. In the last week, we have seen a decline in their purchasing managers index (PMI) and in their trade balance figures (a substantial decline in imports was noted). All hopes of a global recovery are tied to growth in China.

Lower Chinese imports signals that manufacturers are building inventories and they don’t need raw materials. Production will decrease in coming months and that is consistent with what we are seeing in the US. This week, wholesale inventories rose .1% and there was a noticeable decline in sales for the second month in a row. Most of our economic recovery can be attributed to an inventory cycle and that has run its course. This catalyst will be missing in future months.

Earnings season is winding down and the strongest companies tend to announce in the first two weeks. That excitement typically falters and the selling pressure mounts towards the back end of earnings season. This impetus will also be missing as we move forward.

Overnight, Cisco announced earnings and they were very uncertain about future prospects. This tech giant has been steadfast in its belief that an economic recovery is well under way. Apparently, conditions have deteriorated quickly. The market sold off dramatically during the conference call.

Retailers will start posting results during the next week. We heard from Kohl’s today and the stock got nailed after the announcement. Nordstrom’s and JC Penney are on deck.

Tomorrow, retail sales will be released and analysts are expecting .5% rise. This figure has dropped two months in a row when gains were projected. Retailers have noticed that consumers are only spending money on necessities. This is consistent with what we heard from Colgate and Procter & Gamble two weeks ago. Consumers are very cost conscious and they are “trading down” to off-brand products. This pattern suggests serious belt tightening. If tomorrow’s retail sales number comes in weaker than expected, the market will decline. Almost 70% of our GDP comes from consumption and spending is critical to our economy.

The economic news has started to deteriorate in the last two months. The Unemployment Report last week was dismal. We lost 131,000 jobs in July and June’s number was revised lower by 100,000 jobs. The only shred of good news came from the private sector when companies hired more workers than expected. State and local governments are slashing payrolls to balance budgets and this will weigh on employment in future months. I read a research report that suggested almost 500,000 jobs could be cut from local governments over the next two years.

A week ago, initial jobless claims spiked dramatically to 479,000. Most traders discounted that as a “one-off” event. This morning, initial jobless claims rose to 484,000, its highest level in six months. Two consecutive increases signal trouble ahead. Corporations are lean and mean and they do not want to add to overhead expenses during times of uncertainty. Through painstaking effort, they have reduced headcounts and they will not start hiring until they see sustainable demand.

Based on the economic news last week, the market did not deserve to trade near SPY 113. In light volume, institutions were bidding for stock and they created a false sense of security just below major resistance. Bullish speculators were lured in and they expected a breakout. This week, they got the door slammed in their face. After 20 years of trading, I’ve seen this happen time and time again during the “late summer rally”.

The selling pressure will mount in coming weeks. Earnings season is winding down, economic conditions are deteriorating, the inventory cycle has run its course, the weakest seasonal period for stocks is approaching and the recent upward momentum has faded. These factors are likely to generate a correction heading into October. However, there is a wildcard.

European credit concerns have temporarily subsided. If the threat of a double dip recession grows, investors might lose their appetite for PIIGs debt. Should the fear of sovereign default in the EU return, the market will suffer a major decline. Either way, I have my shorts ready. 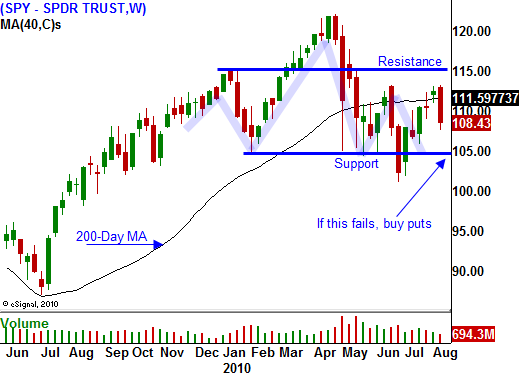