Next Week’s Releases Should Push the Market Below Major Support!

In the last two weeks, the market has weakened considerably. The negative news is mounting and stocks are trying desperately to tread water.

Earnings season is almost over and the backend was not very encouraging. Cisco CEO John Chambers said that business have never been more difficult to forecast. He has been cheering about a “global recovery” for more than a year and his tune changed suddenly. Retailers have been lowering Q3 guidance and shoppers are focusing on necessities. Consumer goods companies like Procter & Gamble and Colgate have noticed that customers are trading down to off brand products. These trends are concerning and business conditions are deteriorating rapidly.

Economic indicators have started to weaken and the most dramatic change came last week. Analysts projected a reading of 7.5 for the Philly Fed and it came in at -7.7. Conditions in the northeast are declining rapidly. Yesterday, durable goods orders rose .3%. However, if you strip out transportation it dropped 3.8%. If you strip out defense and aircraft, it dropped 8%.

This morning, initial jobless claims came in at 473,000. That was much better than the 500,000 reported a week ago, but it still reflects weak employment conditions. Tomorrow, Q2 GDP will undergo its first revision. Analysts are expecting it to drop from 2.4% down to 1.4%. If that happens, it will on a negative psychological effect on the market as it prepares for a busy week of economic releases.

The fireworks will start Tuesday with China’s PMI. I’m expecting it to drop below 50, indicating economic contraction. Two weeks ago, the market tanked when China’s imports declined. That suggested that manufactures see an inventory buildup and they are cutting back on raw material purchases. The world is counting on China to pull us out of this recession and any signs of weakness will have a huge ripple effect.

Chicago PMI and consumer confidence will also be released next Tuesday. Both numbers could disappoint the market and there should be plenty of negative sentiment (after China’s release) going into those numbers.

I am expecting very nervous trading ahead of Friday’s Unemployment Report. Last month, we lost 131,000 jobs. The saving grace was private sector employment. If that falls off, hopes of an economic recovery will be dashed. Public-sector employment fell dramatically last month and I believe it will get even worse. Census workers will be laid off in droves and state/local governments are slashing payrolls in an effort to balance budgets. After four weeks of dismal initial jobless claims, I believe we are set up for a nasty Unemployment Report next week. Traders will not want to go home long over a long weekend and they will sell stocks.

The market is just above major support at SPY 105. Next week’s news will push it below that level and the selling pressure will accelerate.

Credit concerns in Europe are starting to flare up again. Interest rates are rising in Greece and Ireland’s debt was downgraded this week. The European credit crisis will eventually crush this market, but I don’t believe we are to that point yet. We will need to see an actual sovereign default in one of the fringe countries like Latvia, Bulgaria, Hungary or Romania. The likelihood of that happening increases in 2011 as economic conditions continue to deteriorate in Europe.

September is one of the weakest months historically. When you combine all of these negative influences, the probability for a substantial decline is high.

By longer-term out of the money puts and be patient. 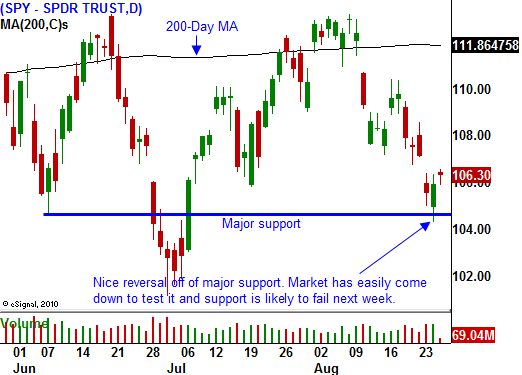