China’s PMI Could Start The Next Wave of Selling Tomorrow. Watch the Major Economic Releases

This is the calm before the storm. Trading volumes normally slow down ahead of a major holiday, but this week may be different. Major economic releases will impact the market and traders will not stray too far from their computers.

Tuesday, China will release its PMI. I am expecting it to fall below 50. That will signal economic contraction. The entire world is counting on China to pull us out of this recession and a slowdown would dash those hopes.

Tomorrow, Chicago PMI and consumer confidence will also be released and both numbers have been relatively soft. If overseas markets are down, these two releases could add to the selling pressure.

Tomorrow afternoon, the FOMC will release its statement. Chairman Bernanke already reflected the Fed’s stance when he spoke at an economic conference last week. They see deteriorating economic conditions, but they don’t believe we will fall into a double to recession. Should economic activity decline, they will do whatever is necessary (QE2 – second round of quantitative easing). The market rallied on the remarks Friday and I don’t believe the FOMC will have much of an impact tomorrow afternoon.

ISM manufacturing will also be released. It has declined 3 straight months and analysts are expecting a reading of 52.9.

Thursday, initial jobless claims will be released. They have been creeping higher during the last month and that does not bode well for Friday’s Unemployment Report. Analysts are expecting 120,000 job losses in August. I believe that forecast is optimistic and there’s a chance for major disappointment. State and local governments have been laying off workers to balance budgets. Census workers are also being let go and that will hit this month. If the private sector comes in flat, we could see over 200,000 job losses.

The economic statistics continue to decline. When they are the focal point, the market has had a tendency to sell off. We are heading into a seasonally bearish period and that will add to the selling pressure. The inventory cycle has run its course and even the strongest tech companies are lowering guidance. First it was Cisco a few weeks ago and Friday it was Intel (lower revenue forecasts).

Corporations are flush with cash and M&A activity has been supporting the market. Companies are also buying back shares of stock. Unfortunately, they are not reinvesting cash into plant and equipment. That is what we really need to get this economy back on its feet.

Friday’s rally felt like a short squeeze. The market was just above critical support and a little rally kept bearish speculators honest. This morning, the market is simply taking back some of those gains. There’s a good chance we could drift lower right into the closing bell. The momentum has been established and traders will reduce stock positions this week ahead of the economic releases.

Watch the Chinese PMI number. If it is considerably below 50, the market will sell off and major support at SPY 105 could be breached. I hate pinning my forecast to one specific number because the market rarely does what you would expect. However, I believe this economic release could be the catalyst for the next leg down.

You should be long October puts. Now it is time to sit and watch the market’s reaction to the news releases. If we close above SPY 108 this week, I will take off a few shorts. If we break below SPY 105, I will sit tight on my portfolio of puts. 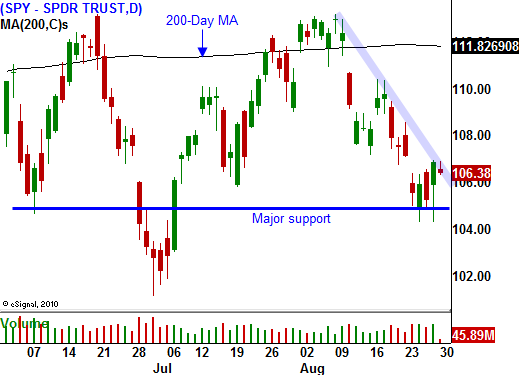