The Fed Gave The Market What It Wanted – The Highs of the Year Are Being Challenged.

The market has been bracing itself for major events this week. The elections and the FOMC statement were highly anticipated and they overshadowed a heavy round of economic news.

Republicans won back the House and they gained seats in the Senate just as analysts had predicted. This news was already priced into the market and stocks barely budged after the results were in. Voters sent a clear message, “cut spending and create jobs”. Republicans are not the solution; they will merely slow the bleeding. Entitlement (Social Security, Medicare and Medicaid) is sucking the life out of this country and not one politician dares to touch this career-ending problem. This “can” is going to get kicked down the alley as our national debt spirals out of control.

Yesterday, the FOMC said that they will inject $500 billion into our financial system over the next six months. It was in line with expectations and the market barely moved on the news. Printing money is an act of desperation. It devalues our currency and given our massive trade deficit, it will result in inflation. Theoretically, buying our own bonds will help our economy grow. Higher tax receipts during the recovery will offset huge investment losses in the bonds we purchase. Interest rates will rise as economic conditions improve and the bonds we buy will decline in value. The “fly in the ointment” is stagflation. In this scenario, tax receipts would not increase and our bond holdings would still incur huge losses.

For every $1 trillion we “print”, the GDP will rise .25%. The risks outweigh the rewards and the government should stop meddling. The Fed can control the money supply, but it cannot force banks to lend. The velocity of money is the real issue.

Speaking of banks, Bank of America might need another bailout. Mortgage “putbacks” could cost it billions of dollars. The housing bubble is far from over and many banks are straddled with toxic assets. This junk is clogging up the banking system and financial institutions don’t want to lend when employment conditions are weak. Fannie Mae and Freddie Mac (reported a $4.1 billion loss in Q3) are bleeding profusely. These entities could cost taxpayers well over $500 billion.

The foundation for our economy is crumbling. From our government down to municipalities, debt levels are astronomical. After 2 years of extensive research, respected financial analyst Meredith Whitney believes that states will be our next financial crisis.

Consumers are not much better off. Personal savings rates declined for decades before the financial crisis and the average baby boomer as less than $100,000 saved for retirement.

On the surface, everything seems fine and that has me bullish on a short-term basis. Growth in China is robust and their GDP grew 9.6% last quarter. They released their PMI this week and it was better than expected (54.7). Traders still believe that they can pull the rest of the world out of this recession.

Corporations have been fiscally responsible and balance sheets are strong. Cost-cutting has been brisk and any revenue growth is going right to the bottom line. They are investing in emerging markets and growth prospects are excellent. Multinationals will be paid in foreign currencies and that will help to reduce risk exposure to the falling dollar.

On a valuation basis, stocks are cheap. Treasury yields are lower than dividend yields on many stocks and investors have the potential for capital appreciation. Money will rotate out of bonds and into stocks. Asset Managers don’t like to chase stocks. They have been waiting for a pullback to get in and they haven’t gotten one. Many were hoping for a decline this week and now that the news this past, they will aggressively bid for stocks. They do not want to miss a year-end rally.

Option implied volatilities have declined in the last 24 hours and the confidence has been restored. We are testing the highs of the year.

Investors have been piling into bonds for many months and a breakout to the upside will get them excited about stocks. Last week, Trim Tabs reported money flow into equities (mutual funds) for the first time in many months. This asset rotation will continue and we will see a nice year-end rally.

Options are cheap and I will be buying calls. My positions will be relatively small since I don’t like chasing stocks. Companies that generate more than half of their revenues overseas and that have pricing power will be of particular interest.

Play the upside, but know that the foundation for this rally is crumbling. Major problems will continue to fester and they will haunt us in 2011. 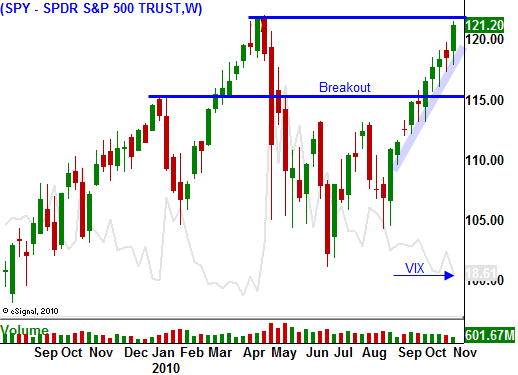