Rate Hike In China Does Not Spook The Market. Traders Are Snowed In.

The market will be very quiet this week and that favors the bulls. The economic news is light and it won’t stand in the way of this rally.

China raised interest rates by .25% and the move was not as shocking as the timing. It is unusual to see a major event over a global holiday. The market has digested the news and the decline is contained. From my standpoint, higher rates in China are a positive. Their economy is so strong, they are trying to apply the breaks. Higher reserve requirements have not done the job so they had to raise.

The Euro crredit crisis still concerns me, but in light volume, the ECB should be able to buy enough bonds to keep interest rates from jumping. When the bond PIIGS auctions fire up in 2011, we could be in for a rough ride.

In the NY, traders are snowed in and that has also added to the lackluster activity.

The rally feels a bit tenuous. I suggest scaling out of long positions this week. I am not looking for a major decline, but we could see one or two days of selling. That would set up a better entry point for long positions. 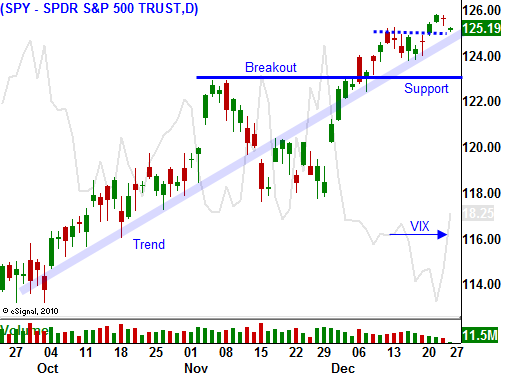