Take Profits and Celebrate The New Year With Family and Friends!

The market continues to defy gravity as it floats a little higher each day on light volume. Asset Managers are bidding for stocks and sellers are raising their offers. The trading range has contracted and the momentum is slowing down.

This morning, positive economic news should have produced a big rally. Chicago PMI jumped to 68.6 and estimates were 61.5. Initial jobless claims fell to 380,000, the best level in 29 months. The four-week moving average continues to decline and that is a positive sign for the economy. It is important to realize that many people put off filing for unemployment during the holidays and this number might be adjusted in future weeks. New home sales also came in better than expected.

The market has been soft today. Stocks tried to rally on the news, but they slipped back. Weakness in Europe might be the reason.

Italy held a bond auction and it missed the top end of its target €8.5 billion range. Interest rates moved higher as credit concerns grow. It is the EU’s largest debt holder and it needs to issue €215 billion in bonds next year. Approximately €50 billion needs to be repaid in the first quarter.

January is typically a busy month for bond issuance. Countries try to get ahead of the curve and they want to secure financing early on. Analysts project that euro zone nations could attempt to borrow up to €80 billion in January. For the entire year, the EU will need to auction over €800 billion in bonds.

Interest rates have been creeping higher across Europe and the ECB will be busy in those auctions. It has been buying bonds at accelerated rate to artificially suppress interest rates. In the first few months we will be able to gauge the amount of firepower they need to use to accomplish this. If rates start jumping higher in many countries, a credit crisis could unfold.

The fuse has been lit and it is just a matter of time until this powder keg explodes. We don’t know how long the fuse is so we have to keep a close eye on interest rates.

If the bond auctions go fairly well, January will be a good month. Economic conditions are improving and this should be a strong holiday for retailers. That means earnings will be excellent. If the bond auctions do not go well, danger lies ahead. The market’s performance in January is a great indicator for the rest of the year. In the last 60 years, the market has taken its lead from the price action in the first month. This indicator has a 90% accuracy rate.

We have been long heavy equipment manufacturers and commodity stocks during the last month. I suggest taking profits on your in the money call options. The market is vulnerable and a quick, brief decline can wipe out those gains. In this light volume environment, don’t take that chance. Exit positions, lock in profits and celebrate the New Year with friends and family. 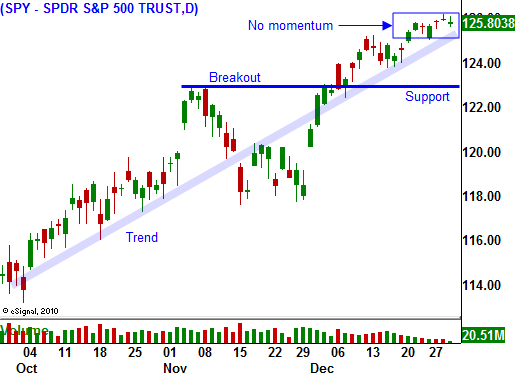