News Has Been Good. Expect The Market To Grind Higher

The market was due for a correction and it was looking for an excuse to sell-off. Last Friday, the negative news was mounting and profit taking set in.

Initial jobless claims edged higher a week ago, Ford released disappointing earnings and political unrest in the Middle East was spreading. The market failed to breakout above resistance and it quickly sold off.

Monday morning, investors supported the market. Although concerning, the conditions in Egypt will not impact global economic activity. The primary concern is the Suez Canal since 10% of all goods pass through it. The protests have been peaceful and Mubarak will step down in September. Overnight, 4 people were killed and he will be lucky if he lasts another 8 months.

There are concerns that protests could spread to other Arab nations. That could happen, but market won’t start discounting the event until it happens. Oil is the fabric to every economy and it would have an impact.

The market will focus on the positives and there are many. Tuesday, ISM manufacturing rose to 60.4, the highest level since 2004. The market jumped higher and it broke through major resistance. Yesterday, ADP reported a better than expected number and the private sector added 187,000 jobs in January. This morning, jobless claims fell by 42,000 and this bodes well for tomorrow’s Unemployment Report. Retailers reported better than expected sales and bad weather did not keep shoppers away.

The Chinese New Year starts today and they did not hike interest rates as expected. Their PMI fell in January to 52.9 and recent tightening still needs time to run its course. Asian markets will be quiet.

Earnings have been excellent and 75% of all companies have beaten estimates. UPS posted a solid number and it is considered a bell-weather for economic activity.

Credit concerns in Europe have subsided and the new credit facility is gaining acceptance. Even municipal bond markets in the US are stabilizing.

The one-day market decline last week did not flush out bullish speculators and they were able to ride out the storm. The sentiment is still lop-sided, but we might not see the quick sell-off I was looking for. Buyers stepped in with conviction Monday and Tuesday and the bid to this market is strong.

The Fed is accommodative and Obama is turning pro-business. Stocks are cheap and money will continue to rotate out of bonds and into equities.

I am out of my element today and I am trying to solve this puzzle without my proprietary searches or resources. The worst blizzard in 30 years has knocked out my internet and cable. Given the information, this market should move higher. It has rested for a day and the news is good.

I will not personally be trading until my “house” is in order. I will be buying back my call credit spreads in retail/restaurant for a small loss. ISM services will be released shortly. After a rise in consumer spending Monday and good retail same store sales today, I am on the wrong side of this trade. I many re-enter the positions when I can evaluate the price action.

Consider selling some out of the money put spreads on strong stocks that have reported good earnings. The Live Update table is not working, but I hope to have it up later. Here are some attractive candidates: CAVM, MIPS, UNP and FFIV. All have posted good earnings and all have pulled back to support. Sell the put spreads below the support level and place the stops at support. 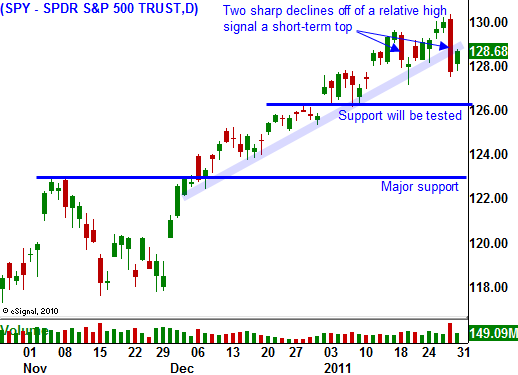