If Support At SPY 130 Holds – Stay Long. The Reaction To IBM and INTC Will Be Critical

Yesterday, the market pulled back after Standard & Poor’s lowered its outlook for the US. It is concerned that politicians will not be able to agree on fiscal reform and that budget deficits will continue to grow. Each party has its own plan and they differ greatly. President Obama’s speech last week polarized the process.

From a trading perspective, this downgrade meant little. Ratings agencies have no credibility after the 2008/2009 financial crisis. Months ago, PIMCO (the largest bond fund in the world) announced that they had completely divested from US treasuries. This action means more than a “Johnny-come-lately” ratings change. The market has been nervous and it was searching for a reason to decline.

After the initial “knee-jerk reaction”, the market was able to rally above support at SPY 130. Asian markets were down overnight and our market open to the plus side. This is a positive sign.

As I pointed out last week, financials are extremely important to this final push higher. Goldman Sachs and Zion’s Bank beat estimates and the stocks are trading higher. Bank of New York, Northern Trust, MBT Financial, Regions Financial, State Street and U.S. Bancorp also released earnings. In aggregate, the sector is flat this morning. The primary concern has been that profit growth has come from a reduction in loan loss reserves. Financials won’t provide the spark we need, but I don’t believe they will weigh on the market either.

After the close, IBM and Intel will release earnings. They will set the tone for the entire tech sector. Yesterday, Oracle posted great results, but the stock did well just to tread water in a very negative market. Tech stocks have room to run and many have declined recently. Last week, IDC reported that PC sales were down 3.2% in the last quarter and chip stocks were down. Supply disruptions due to the earth quake in Japan are also a concern. However, only 29% of the companies that have posted earnings so far have mentioned any negative effects related to the disaster.

Credit concerns in Europe are starting to heat up. Greece just auctioned 90-day bills and the yield was over 4%. European banking officials feel that restructuring is imminent. This will result in massive losses for European banks. Portugal’s 10-year is above 9% and they have requested a bailout. They voted down austerity plans a few weeks ago so that they could continue to spend beyond their means. Now they want other EU members to lend them money. Finland is a strong member and although they will contribute to the bailout fund, the opposition is mounting. Yesterday, the UK said that they will continue to contribute to the bailout fund through 2013 and then they are done. This rift between the strong and the weak will grow in coming months as the EU tries to define bailout policies.

I believe the overnight earnings will be relatively strong. The market will try to rebound, but it will do well just to get back to the highs of the year. Resistance will be strong and the dark clouds on the horizon will dampen investor enthusiasm.

Interest rate hikes in Europe/China, escalating PIIGS yields, the end of QE2, the debt ceiling and cautious guidance will weigh on the market. I am hanging on to my May call options and they are marginally profitable. My cost basis is decent since the positions started out as April/May calendar spreads. When the April calls expired last week, I was left with the May calls. As I mentioned yesterday, hang on to your call positions as long as SPY 130 holds. The upside will be relatively contained and you need to take profits along the way.

The price action is quiet this morning and anything on the plus side would be positive after yesterday’s decline. I believe the earnings after the close will be solid and stocks will move higher tomorrow. If support at SPY 130 fails, exit call positions. 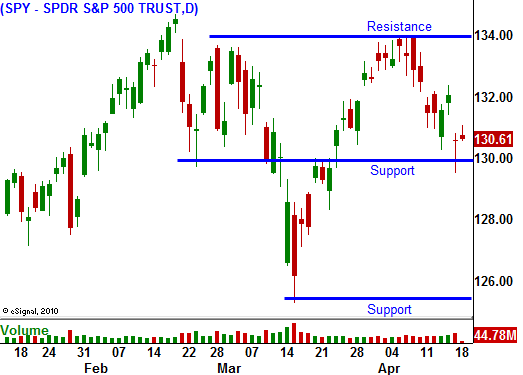