The market has been able to find support at SPY 127. That is just above the 200 day moving average. Deteriorating economic conditions and uncertainty in Greece are creating selling pressure.

Last week, Empire Manufacturing came in lighter than expected. PMI, industrial production, ISM manufacturing, ISM services and unemployment have recently disappointed the market. Today, Goldman Sachs lowered Q2 GDP forecasts of 3% down to 2%. That was an obvious adjustment and it is not weighing on the market since weak economic conditions are already priced in. Many of economic data points came off of high levels and the initial drop is usually the most dramatic.

Conditions in Greece did not change over the weekend. The ECB/IMF will review austerity plans and privatization schedules during the next two weeks. If they are satisfied with the progress, they will provide Greece with its next round of aid. I believe this will transpire, but a clear message will be sent. Greece needs to stay on track. The EU knows a default could start a financial crisis and they will accommodate.

In coming months, the EU needs to finalize its bailout policies. If they do this, they can ramp up the new credit facility and they can raise money for future bailouts. This will enable them to kick the can down the road and the market will like the concept of centralized financing. As it stands, each issue is being dealt with on a “one-off” basis. This process lacks organization and it destroys confidence. Each time they meet, the world gets to see the in-house squabbling and it scares investors. I believe the EU will find middle ground late this summer and they will start raising money this fall.

I am not bullish on Europe. The banking system is intertwined and huge loans have been given to “Club Med”. They have structural issues and in the early stages of reform we are seeing riots. The pain has not even started and this will only get worse. China is supporting Spain’s bond auctions and their interest rates are stable. This is where the line needs to be drawn. Last week, Moody’s downgraded Italy and that is another trouble spot. The EU will get its policies in place and we will muddle through the end of the year without a crisis. Next year, the situation will worsen and the hole will be deeper.

China’s inflation is 5.5% and analysts believe it could be even higher in July. Last week, they raised bank reserve requirements for the sixth time this year. That came as a slight relief since it is more “dovish” than a rate hike. I believe China will raise interest rates a quarter-point by the end of June. Their steadfast commitment to containing inflation tells me that more tightening lies ahead. These actions will force an economic slowdown and the fragile recovery in Europe and the US will fail.

Government stimulus has not provided job growth. That artificial support is winding down and politicians are fighting for austerity as our national debt spirals out of control. The $800 billion stimulus plan and QE2 are over. Fiscal spending cuts combined with a slowdown in China could be lethal. These two events will start to surface in a couple of months.

The market is oversold and I believe we will get a nice bounce. It won’t last long and we should be able to get back to SPY 132. Option premiums are rich and bearish speculators have taken positions. This sets us up for a short covering rally. Earnings season is a few weeks away and that will also support the market. Corporate profits have been excellent and they will be strong in Q2. However, guidance for Q3 will be the spoiler.

As we get into late July, I will become bearish. Ideally, the market will rally before then and option premiums will decline. This will give us an opportunity to gradually build put positions.

For now, I still like selling put credit spreads. The market should be quiet heading into the 4th of July and the Unemployment Report won’t be released until July 8th. The week after that, earnings season will begin. As long as the market closes above SPY 125, I will hang on to my put credit spreads. I am a safe distance from the action and the stocks I have selected are holding up well. Find stocks with relative strength and sell put credit spreads below major support.

GDP and durable goods won’t drive the market this week. FOMC statements will be “market friendly” and the Fed does not want to spook the market after the recent decline. Look for quiet, range bound trading this week. 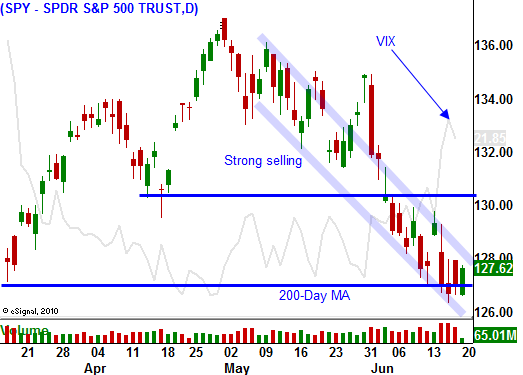