Yesterday, the market took a breather after a huge run-up on Tuesday. Traders evaluated the” Group of Six” proposal and weighed the political reaction. The consensus is that the debt ceiling will get raised and default will be avoided.

Republicans rule the House and Democrats control the Senate. The “Group of Six” proposal would probably get through the Senate, but Republicans still don’t like the tax increases and they want bigger cuts. Even if proposal gets through Congress, it will take weeks to translate the specifics into legislation. It means the debt ceiling will have to get raised on a temporary basis no matter what.

President Obama said weeks ago that he would not endorse a temporary solution. With this latest development he has changed his mind. The deadline approaches and the consensus is that the McConnell Option will get past. In essence, it allows the President to raise the debt ceiling by $900 billion in three tranches over the next year and a half. Republicans are still fighting for immediate budget cuts ($500 billion) to be included in the package. This solution puts the weight of our deficit on the President’s shoulders heading into 2012 elections.

The GOP already passed the “Cap, Cut and Balance” plan in the House. It reduces the national debt by $6T over the next decade and it will get shot down in the Senate. This exercise clearly points the deficit cannon at Democrats.

Debt ceiling fears have subsided and traders are focused on earnings. Estimates have been lowered and companies are easily exceeding estimates. The strongest companies post early in the cycle and this euphoria is typical. Tomorrow, GE and McDonald’s will release. The news should be positive, but I’m not looking for major market impact from these announcements. Next week, the earnings floodgate will be open and by the end of the week we will know exactly where we stand.

The economic news today was weak. Initial claims rose 15,000 and China’s PMI fell to its lowest level in 18 months. After six interest rate hikes this year and six increases in bank reserve requirements, China might have reached the tipping point. The flash PMI reading fell to 48.9 and that indicates economic contraction. Inflation is still an issue and I believe China will continue to tighten. An economic slowdown in China would be devastating for global markets. For the time being, this news is being swept under the carpet.

EU officials met to discuss the Greek bailout and they agreed to a second tranche of money. This has eased credit concerns and interest rates in Italy/Spain have pulled back the last two days. The bigger issue is that they have not come up with a universal bailout plan. They need to start raising money with the new credit facility to keep the contagion at bay. European markets are surging higher.

If the McConnell plan is the best that politicians can do, the market will get nervous by September. Ratings agencies want to see long-term solutions to structural debt problems and this plan simply kicks the can down the road for another 18 months. We could lose our AAA bond rating if politicians can’t find middle ground with the “Group of Six” plan in coming months.

I’m taking a loss on my put positions today, but I am not buying into this rally. I don’t care if I miss some upside. Economic conditions are deteriorating (China is the biggest concern) and I believe corporate guidance will be cautious as earnings season unfolds. Politicians will continue to drag their feet and a debt ceiling decision will come at the final hour.

The market is reaching for resistance at SPY 136 and two weeks ago it was slapped down from that level.

I suggest staying on the sidelines. Friday’s price action will be very flat and you won’t miss much. All of the good news is baked in and stocks will struggle to rally next week even after posting good results. I am still favoring the short side, but I need to see this momentum stall before I re-enter short positions.

I WILL BE TAKING FRIDAY”S OFF FROM JULY 22ND-SEPT 2ND. THERE WILL NOT BE MARKET COMMENTS OR NEW PICKS TOMORROW, BUT THE LIVE UPDATE TABLE WILL BE WORKING. YOU WILL STILL BE ABLE TO SPOT THE ACTION AND WE HAVE PLENTY OF GREAT LONGS/SHORTS TO PICK FROM. AS SUMMER WINDS DOWN, FRIDAY’S TEND TO BE THE SLOWEST TRADING DAY OF THE WEEK. THIS IS THE ONLY TIME OFF I TAKE ALL YEAR AND IT ENERGIZES ME FOR A BUSY FALL TRADING SEASON. 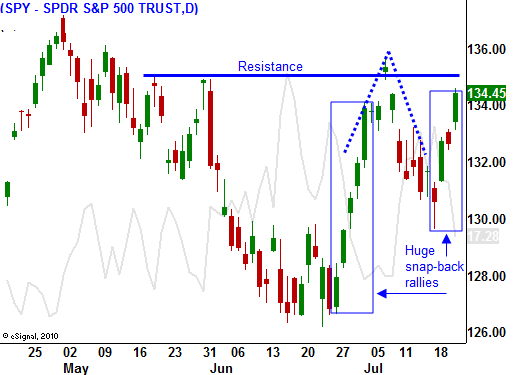