Yesterday, stocks retreated when a debt ceiling agreement had not been reached over the weekend. The President and the Speaker of the House addressed the public last night and the comments were adversarial. Surprisingly, the market is not selling off before the open.

Republicans and Democrats have drafted their own plans and the House will vote on Wednesday. Given the market’s reaction, traders believe that the debt ceiling will get raised. It is unlikely that long-term structural issues will be part of the deal and our credit rating could be downgraded. This will cost our nation billions of dollars as our borrowing costs rise (a 1% rise in interest rates will cost us an additional $140B/year).

Taxes need to go up as well and we need to close loopholes. Over 80% of our tax revenues come from individual taxpayers and a flat tax would increase revenues and reduce complexity. I don’t mind paying higher taxes if the money is being used to pay down our national debt. Unfortunately, when the government has more money, they squandered it.

Here is a classic example. Under the Carter presidency, Congress established the Department of Energy with a stated goal to lessen our dependency on foreign oil. Since 1977, the DOE has spent almost a trillion dollars and it has done nothing to justify that expenditure over 33 years. The DOE has 28,000 full-time government employees over 100,000 contract employees. This year’s budget of $29 billion is pure waste. The U.S. hasn’t lessened its dependence of foreign oil, while the price of oil has increased from $14 a barrel in 1977, when Congress ordered the formation of the DOE, to over $140 a barrel a few years ago.

Corporate taxes in the US are the second highest in the world and they only account 15% of our total tax revenue. If we raise corporate taxes, companies will simply move their headquarters overseas. They have been doing this en masse over the last five years. This is not a viable way to raise revenues.

Republicans need to agree to higher personal tax rates and Democrats need to agree to entitlement reform. One will not happen without the other. The President needs to be a negotiator for both parties and he has clearly taken sides. His public remarks are inflammatory and a watered down temporary solution is the most we can hope for. Regan and Clinton were great negotiators, Obama is not.
All eyes are on the debt ceiling and other issues should be raising concerns. China’s growth is slowing and they intend to keep both feet on the brakes until inflation is clearly in control. Interest rates in Spain and Italy have been creeping higher at a steady pace and credit concerns in Europe are about to ignite. These two countries dwarf the problems in Greece and bond auctions this week did not go well. Domestic economic conditions are slowing and we won’t have any “drivers” (inventory rebuild, fiscal stimulus or quantitative easing) to lean on.

Earnings have been excellent, but the underpinnings are weak. Initial claims jumped 15,000 last week and this Thursday’s number is important. If it moves higher, the table will be set for a weak Unemployment Report in 10 days. This Friday, preliminary Q2 GDP will be released. Analysts are expecting a 1.8% growth rate. That is a dismal showing given that most economists had forecasted strong growth this year. The kitchen sink has been thrown into this economic recovery and we can’t even muster a 2% growth rate. Growth isn’t even keeping up with inflation and in “real terms” our economy is contracting.

I believe we are set up for a nasty decline. This is almost like a sleight-of-hand magic trick. Investors are focused on earnings and the likelihood of a debt ceiling increase and they are missing all of the other warning signs. Washington will disappoint as they have for years and the ratings agencies won’t like the solution. Corporate guidance will be cautious in the midst of all of this uncertainty and stocks will retreat on soft economic releases and credit concerns in Europe.

I’m surprised the market has held up this well and I am buying put options in September. I realize that I might have to weather a temporary relief rally when the debt ceiling gets raised. Once that momentum stalls, the market will retreat. There is an outside chance that politicians will still be scrambling hours before the deadline and that will result in a swift market decline. That is why I am buying puts now.

The price action is starting to weaken and I believe support at SPY 132 will be tested this week. 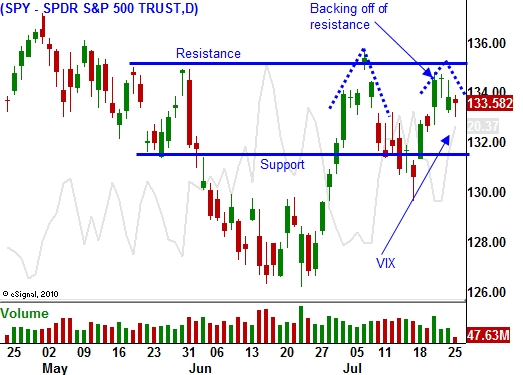