The market has been incredibly resilient this week. Even after the President and the Speaker of the House bashed each other publicly Monday night, stocks held strong yesterday. Both parties are drafting plans and it looks like Sen. Reid (D) will get the first shot when the House votes tomorrow.

As I mentioned yesterday, the entire process will come down to the final hour. At a time when the President should be mediating, he has inflamed Republicans. The House and the Senate are divided and they desperately need his leadership. Unfortunately, he keeps making ultimatums and he has painted himself into a corner.

Ratings agencies will not have much confidence even if the debt ceiling is raised. This entire process demonstrates our inability to cut deficit spending.

This morning, the price action is very weak and investors are heading for the exits. If we do not get a resolution before the weekend, stocks will decline slightly. Traders will expect a deal over the weekend and they won’t get too aggressive with shorts. If we come in Monday morning without an approved plan, the market will tank. In fact, Asian markets will fall sharply Sunday night.

I am hearing many traders say that any decline is a buying opportunity. Once the debt ceiling is raised, they are expecting a massive rally. I’m not that optimistic. We are likely to get relief rally, but it will be short-lived.

The best we can hope for is a temporary solution. It will not address structural issues and our credit rating will be lowered. That might not concern many investors, but this is a slippery slope. It will be the first crack in the dam and it will pave the way for future downgrades.

Economic conditions in China are slowing and Caterpillar referenced that in its guidance. Their PMI dropped to a level that indicates economic contraction. UPS released earnings this week and they cited soft activity in the US. Durable goods orders fell 2% this month and consensus estimates for Q2 GDP is 1.8%. That number will be released Friday and it is disappointing. At 1.8% it did not even keep up with inflation and we have contraction on a “real” basis.

As I’ve been mentioning, the driving influences behind this economic recovery have passed. China is contracting, business inventories have been rebuilt, fiscal stimulus has ended and quantitative easing is over. Even with all of these “positives”, we only saw a few decent months of private-sector job growth.

This afternoon, the Beige Book will be released and it will reveal domestic activity region by region. I expect to see weakness and this could weigh on the market. Tomorrow, initial claims will be released. They climbed 15,000 last week and it’s been a long time since we’ve been below 400,000. A dismal number will cast doubt ahead of next week’s Unemployment Report.

PIIGS interest rates in Europe are starting to climb. Even if the situation in Greece is resolved, Spain and Italy are on the front burner. The flavor of the Euro credit crisis will change dramatically if default risk continues to get priced in. These are major European economies and they are too big to bail and too big to fail. China committed to buying Spain’s debt and even with that backstop, their auction this week did not go well.

Even we did not have a debt ceiling crisis, I would be getting bearish. Earnings have been excellent, but economic conditions are deteriorating and guidance will be increasingly more cautious as earnings season unfolds.

I am long puts, but my position is relatively small. I believe the money I can make if a debt ceiling agreement is not reached by Monday is far greater than the money I will lose on a relief rally. Politicians continue to disappoint and for some reason, the market is giving them more credit than they deserve. It is unimaginable that they cannot find middle ground in this dire situation.

I hope you took my advice and bought puts yesterday. The implied volatility is starting to climb and options are getting more expensive.

If bulls can’t rally this market back by late afternoon, we could hit an air pocket into the close as buying dries up. 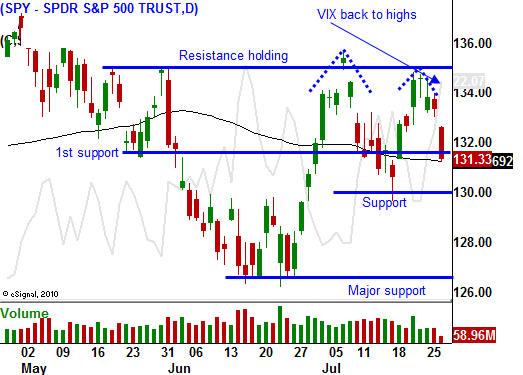