We Are Making Money Today! Take Partial Profits – Try To Hold the Rest Into the Weekend.

Yesterday, traders waited patiently for the FOMC statement. As expected, “Operation Twist” was announced. The Fed will sell short-term bonds and buy long-term bonds to flatten out the yield curve. They tried this four decades ago and the maneuver was unsuccessful. Stocks tried to rally on the news, but selling quickly set in.

As I stated yesterday, the Fed was in a “damned if you do, damned if you don’t” situation. If they did nothing, the market would interpret that as a sign of weakness. “Operation Twist” is an indication that the Fed stands ready to do whatever they can. Unfortunately, their actions will be ineffective and they are out of bullets.

The magnitude of the program was in line with expectations, but it will be rolled out over nine months and the market wanted a shorter span of six months. From my perspective, the biggest news was the change in rhetoric. The Fed now sees significant risk of an economic decline.

Yesterday, I advised you to buy puts ahead of the statement and to add to the position if the market made a new intraday low. If you followed my suggestion, you are making a shit load of money today. I was so confident in this analysis that I bought puts across all of my option services. This morning, the S&P 500 is down more than 30 points before the open. I need to blow my own horn once in a while. My market forecasts have been spot on and that is why my Daily Report subscriber base continues to grow. I hope you are making great money too!!

The bad news keeps coming. Overnight, the flash PMI in Europe and China was released. In both cases, they dropped below 50 indicating economic contraction. Rare earth producers and coal miners lowered forecasts this week citing soft demand in China. As I’ve been mentioning, I believe the “debt ceiling” debacle will result in a series of dismal economic releases. Corporations “clammed up” during that one month period.

The credit crisis in Europe continues to grow. The ECB/IMF/EU could have calmed nerves by giving Greece the next payment, but they did not. Instead they scheduled another meeting in two weeks. That means the market will nervously wait in limbo for their decision. Everyone expects Greece to get funding, but the process has been slow and arduous. In general, European officials have a very lackadaisical approach and I sense they do not grasp the gravity of the situation.

This morning, initial jobless claims fell slightly but they are still elevated. The four-week moving average is creeping higher and that does not bode well for the Unemployment Report in two weeks.

There is a new budget crisis in Washington. Congress needs money for disaster relief and it has run out. It needs to wait two weeks until the new fiscal year begins. On a longer term basis, Politicians wanted to avoid another debt ceiling debacle ahead of 2012 elections. They approved enough money to get through next year; however their projections did not account for a severe economic downturn or a $450 billion “jobs plan”. It is likely that we will go through this process a year from now.

As dire as the news seems, I am having difficulty finding good shorts. Stock valuations are extremely attractive and worst-case scenarios are priced in. This morning, FedEx released earnings. The profits were excellent and they revised 2011 estimates down slightly. The economic outlook is fairly weak, but not disastrous. FedEx is often considered a market barometer.

I believe this market selloff will continue for another week or two. Economic forecasts will be dismal, the Fed will be deemed ineffective, the President’s “jobs plan” will get shot down and European credit concerns will grow. Investors will throw in the towel and we could test the lows of the year. Once this wave of selling passes, it will set up an excellent buying opportunity.

Asset Managers will start bidding once support is established. Valuations are too compelling and they will try to get a jump on a year-end rally. Look for a big intraday reversal. That will be our sign to get in.

At this juncture, everything seems hopeless. We are in a seasonally weak period and the deck is stacked against us. The selling will continue for a few days. Take some profits on put positions and hang on to the rest. If the market drops dramatically and immediately reverses, take profits on the rest of your puts. I believe you should be able to hold your position through the weekend. 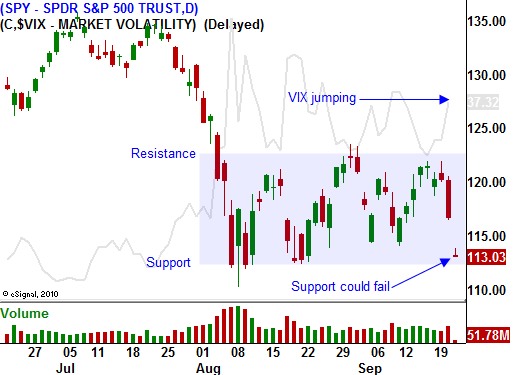