After A 10% Run Bulls Will Take Profits and Bears Will Probe For Support. Buy the Dip Next Week

Yesterday, the market continued to push higher on the notion that Europe would get its act together. France and Germany will draft a “grand bargain” to recapitalize banks and stop contagion.

A year ago, we had a similar backdrop. Greece was dangerously close to default and the EU was caught flat-footed. They did not know if they were going to bail out Greece or let it fail. Once they formed the EFSF, credit concerns eased and the market rocketed 35% higher.

The situation has deteriorated throughout the year and conditions are dire. Portugal, Ireland, Spain and Italy have entered the fray. We don’t know the details of the plan and we won’t get them for another two weeks. Most analysts believe that larger haircuts (50%) on Greek debt will be taken. They also feel that the EFSF will act more as an insurer than a bank. It will cover the first 20 to 30% of losses and this will give it more leverage. The market is giving the EU more credit than it deserves.

To date, they have dragged their feet and argued throughout the process. Greece still doesn’t have a firm commitment for the next bailout payment. Slovakia voted not to expand the EFSF and one small country can throw a wrench into the entire process. Finland wants bailout loans to be collateralized. The EFSF has an enormous amount of responsibility and it only has a dozen staff members.

Even when the plan is announced, it will take many months to get passed. We’ve already seen how difficult it was to expand the EFSF. We also don’t know how the funds will be raised. Interest rates in Italy spiked to 6% on the 10 year bond. Confidence behind the scenes is low and this move is a warning sign.

As we play this bounce, it is very important not to lose sight of the big picture. Conditions in Europe are much worse than they were a year ago and global economic conditions are soft by comparison. I don’t believe we will see a massive year-end rally.

As we get closer to November, the headwinds will blow harder. Europe’s “grand bargain” will be announced and this could be a “sell the news” event. The “Super Committee” has a deadline and they need to trim $2 trillion from the budget. We have not heard one word about the progress. President Obama’s jobs package will also be ripped apart in coming weeks and investors will get frustrated by the gridlock.

For now, we might still have a little more upside. Shorts are getting squeezed ahead of earnings announcements and some of the strongest companies will be reporting in the next week.

Alcoa missed the bottom line, but revenues were decent. They are optimistic about growth in China. Overnight, China’s trade surplus shrank. It reported larger than expected copper inventories, but copper imports increased. China’s market posted another small gain and the news was well received.

This morning, J.P. Morgan reported a 25% decline in profits. Investment banking revenues dropped substantially. The stock pulled back on the news and the rally in financials was short-lived. After the close, Google will report earnings.

Last night, J.P. Morgan said that Q3 PC sales came in better than expected. That could bode well for IBM and Intel next week. They report Monday and Tuesday respectively.

During the market decline in September, the possibility of a double dip recession was priced in. Clearly the global economy is not falling off a cliff. Conditions will continue to decline at a slow pace now that global austerity measures are in place. Initial claims came in at 404,000 this morning and that was in line.

Stock valuations are attractive and Asset Managers are selling bonds and buying equities. They are trying to get long ahead of the year-end rally and this rotation will continue. The market rallied 10% in a week and the downside will be tested in the next day or two. The bid will return and stocks will push higher next week. The first hurdle is SPY 123. I believe we can push through that. I don’t believe the market will be able to penetrate SPY 125 unless we get a surprise from the EU (a comprehensive bailout plan) and a surprise from the “Super Committee” (budget cuts of $2 trillion+).

We took profits on two thirds of our long positions a couple of days ago. I suggest taking profits on the rest today. Let’s wipe the slate clean and see if we can buy a dip ahead of earnings next week. I will greatly reduce my size on the next round of trading. We made a boatload of money last week and I don’t want to give it away.

Look for soft price action today. Bulls will take profits after a nice run and bears will probe the downside in search of support. I expect to see selling into the closing bell.
.
.
My forecasts have been spot on and I know from your comments you are making great money. Please do me a favor and request that OneOption be added to Investimonials: click here

The product name is: OneOption
The url is: http://www.oneoption.com
The product category is: newsletters

Once they add my site, testimonials can be posted. Thanks for taking the time. I don’t advertise and referrals are my only source of new business.
.
.
. 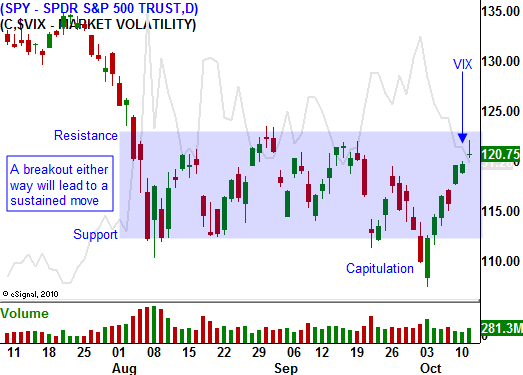