We Need A News Event. The Calendar and the Price Action Will Improve In A Week

Last week, the market fell into a tight trading range. The economic releases were light and earnings season started to wind down. Traders are searching for the next catalyst and this could be another quiet week.

The Greek Parliament approved the austerity plan and that keeps the IMF/ECB bailout talks alive. They need to secure $130 billion in fresh loans within a month. Unfortunately, they haven’t even secured that loan and analysts are wondering if more is needed. This problem will continue to fester until we have a disorderly default.

The ECB’s liquidity injection has temporarily restored confidence. Some traders even feel that a Greek default is priced in. I disagree. The market will quickly focus on the next crisis. Financial markets are based on trust and the troika doesn’t even have enough faith in Greece to give them the bailout money. They are considering an escrow account so that a new Prime Minister (April elections) can’t rescind prior agreements.

Interest rates in Spain inched higher last week and Italy will hold a bond auction tomorrow. Sovereign debt auctions will pick up in the next few weeks. I feel that rates will stay stable for at least a few weeks. The ECB will give banks another $500B liquidity injection and we will get those results on 2/28.

Tomorrow, Europe will release industrial production and CPI. The bigger number will come on Wednesday when they post GDP. Germany has been keeping the rest of Europe afloat and last week they reported slower than expected industrial production. This could be a negative sign for Wednesday’s report.

In the US, we will report Empire Manufacturing and industrial production on Wednesday. These numbers have been stable and they should not have much of a market impact. The FOMC minutes will also be released. During the last meeting, the zero rate policy for the next three years was outlined. The minutes should be market neutral to slightly bullish. On Thursday, PPI, Philly Fed and initial claims will be released. These numbers should also be benign.

Friday we saw our first sign of selling. The news did not justify the move and buyers stepped in minutes before the close. The market was able to recover more than half of the losses. With today’s rally, we are right back where we started.

Bears will probe the downside in search of support. If they can’t get anything going, they will abandon the cause. Stocks have fallen into a pattern where they open lower and rally in the afternoon. This shows that the bid is still fairly strong.

The market is right up on major resistance. Each time we try to break out, profit-taking sets in. We are in “no man’s land”. Keep your size small and wait for a breakout or a breakdown. We need a major news event to knock us out of this trading range.

I believe the better trade will come off of a swift pullback. Bullish speculators will get flushed out and Asset Managers will buy the dip. At this juncture, I believe the selling will be contained and the correction will be less than 7%. Asset Managers don’t want to chase at the top of the range, but they will buy on pullbacks.

If the market breaks out, we could see a bit of short covering. After the initial move, the gains will be hard-fought. I simply don’t see the catalyst that will spark a sustained rally. There are too many issues that could raid the party.

I am long VIX calls and I am long calls on stocks that have good momentum. This is a hedged position and I’m keeping my size small. Once we get a substantial move in one direction or the other, a better trading opportunity will present itself and I will increase my size.

Look for a quiet week. The calendar will improve next week and the action will pick up. 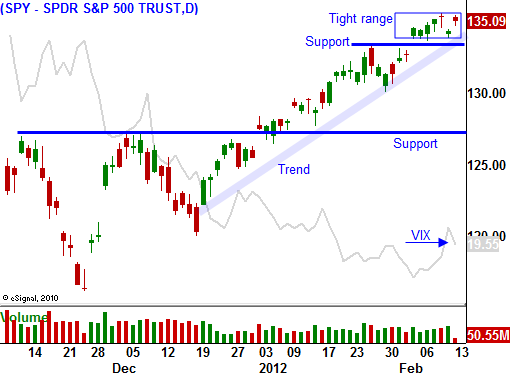