SPY Will Make A New High. No News To Stand In the Way This Week. Bid Is Strong

Posted 11:00 AM ET – Yesterday, the market surged to new highs. The price action was good during the first half the day, but profit-taking pushed the SPY back down to $185. Sellers probed for support this morning and the damage was contained. We are starting to grind our way back and I am expecting positive price action Tuesday and Wednesday.

There are only a few economic releases this week. Durable goods orders are volatile and this number does not typically have a lasting impact. Initial jobless claims have been improving in recent weeks and that trend should continue as weather conditions improve. Both numbers will be released Thursday.

GDP will be released on Friday and it could be a little light. Consumption has been low and inventories are building. Traders seem willing to give this weather induced soft patch a free pass.

Janet Yellen will testify before Congress on Thursday. She is considered by most to be dovish and her statements should be market friendly. There has been plenty of “Fed Speak” in recent weeks and I’m not expecting anything new.

The debt ceiling has been extended and Obamacare will be delayed for small businesses. Both developments reduce uncertainty and they are bullish.

Corporate profits grew 7.5% year-over-year and that is a healthy pace. Cash flows are at record levels and companies are using that money for M&A’s and buybacks.

Traders are concerned that China’s growth is slowing. They have a growth target of 7.8% and the PBOC will jump and action if conditions deteriorate.

The recovery in Europe has been lost in the shuffle. Flash PMI’s were decent last week and GDP’s were better than expected across the board. Moody’s upgraded Spain and that is also a positive sign.

I mentioned last week that the gains will be hard-fought from here. We should see a two steps forward, one step backwards pattern. Stocks got a little overheated yesterday and profit-taking set in.

We want to see a nice controlled grind higher. The news is light this week and momentum should fuel this rally.

I have been scaling into call positions and I bought more when the SPY traded above $185 yesterday. I am raising my stop up to SPY $184. I don’t want to see this breakout fail. If the momentum stalls, I will exit positions.

I believe that we will probe for support early in the day. The bid will grow and the market will grind higher. Positive comments from Janet Yellen will fuel the rally tomorrow. The macro backdrop is still bullish. Look for opportunities to get long.

My game plan is very simple at this stage. If we don’t get any follow-through buying, I will exit positions and evaluate from the sidelines.

The first week of a five week option expiration cycle is typically boring. The market might need a little time to gather strength.

Dips will be brief and shallow.
.
. 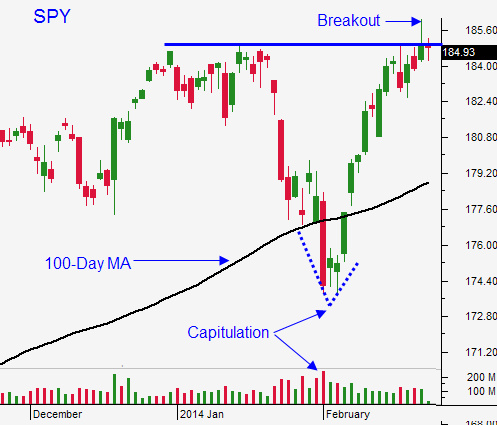