The process to this point is very time consuming – but very rewarding. Each day I drill down to a few stocks that I really like technically and fundamentally. In the process, I also become familiar with many other prospects that might gain future consideration. In today’s option trading blog I’ll discuss the next step.

For some stocks, this is my first encounter. For others, I know the company but the character has changed. I need to determine if the price action that lead me to the stock is “real” or “temporary”. The best way to do this is to put the stocks in a holding tank for observation. I separate the bullish stocks from the bearish stocks and I create two watch lists. This allows me to watch how the stocks in each group respond to overall market moves. Mentally, I also group the stocks into two different categories, stocks that are in a strong move but are over extended and stocks that are just starting to move.

I intend to watch the stocks over a period of days and I want to get a feel for the tempo. I look for relative strength and weakness to the market. If the market is rallying, my first reaction is to see how the bearish stocks are behaving. Yes, the bearish stocks. I look at those first because I want to find the ones that have a “lid” on them. The stock is so weak that even in a strong market it can’t generate a short covering rally because there are too many sellers! I also need to monitor my short positions to make sure they are behaving. If my short positions are unusually strong, I have to stop them out. If a stock in the watch list is too strong, it comes off. I’m more interested in future plays and risk management than I am in current gains or trades that “got away”. The market is dynamic and hence, the “holding tank” is ever changing. Here are a couple of examples of bearish stocks where the move was just starting.

The first example is Salesforce.com – CRM. It showed some signs of strain during the recent rally when the market made multi-year highs. It was in a powerful move up and it was close to major resistance. I noticed a day where the stock had gapped down during a big market rally (it was just an analyst downgrade so I was already skeptical of the move) and it was struggling to fill the gap. The stock trades at an incredible P/E and I shorted it earlier in the year with tremendous results (first red box on the chart). CRM hit my radar at the second red box. I had to respect the market rally and the strength of the stock so I just watched. I wanted to see it breach the red support line below the box and I did not want to see it above the minor resistance it had formed a few days earlier. The stock blew through and currently it is testing all time highs. The deep trough and very high valuation tell me that I will see this short again – someday. It might be a while, but I will see it. 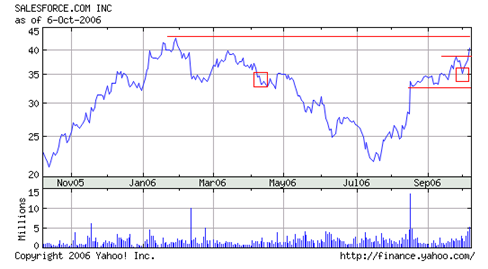 The next stock was also a short earlier in the year (first red box) and it too produced great results. It is Express Scripts – ESRX. It hit my radar at the second red box when it broke support (the long horizontal red line). I started to watch it and I knew that the stock had overhead resistance (the short horizontal red line). It trades at a high P/E and ESRX had not participated in the big market rally from August through September. What’s more, after the initial move through support, the stock was not able to bounce (recoup recent losses) even while the market staged a monster rally. This told me that the sellers were hitting every bid and the stock could not get “off the deck”. It has turned out to be a nice short for my subscribers. These charts do not include Friday’s price action. Take a look at both stocks. 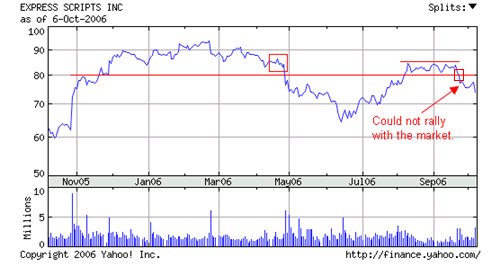 There are instances where I will see something that looks very attractive and requires immediate action. In those cases (less than 10% of the time) I trade the stock and I only take a quarter position. If the move is fast an furious, I don’t want to battle inflated option implied volatilities (IVs) and wide bid/ask spreads. I just want to be in, use a tight stop and hope that the momentum continues. If I’m wrong, I’m out. If I’m right I trail a stop. The slippage in option trading is too great and I have not had time to get a feel for the stock and determine my level of commitment.

I skipped over the “good” part. When the market is rallying and my longs are participating, I let them run. If a stock has made a nice move up and it is running out of steam, I’ll take profits. As for my bullish watch list, the candidates that are moving higher will get “playing time” when they take a breather. I do not chase stocks. The stocks that are not moving higher are eventually removed form the list.

Even though these stocks have been extensively research – they don’t all behave. As I watch them for a few days I really get to know them. That’s when I can take the next step and formulate an opinion.

In my next option trading blog I will show you how I form an opinion. I’ll use a couple of examples where I have formed it and the move is poised to happen.

Trading for a living is difficult

Sizing appropriately and over management of trades

“Find yourself a wife that can look at charts…”

Why Shorting is Difficult