In today’s option trading blog I will form an opinion of a stock, quantify my expectations and structure an option trade. I have not considered this stock for a number of months but it recently came up on my Scanner. It is Armor Holdings, Inc. (AH). The company manufactures and provides armored military and commercial vehicles, armor kits for the retrofit of military vehicles, protective and security products for law enforcement and military personnel, aircraft armor, and aircraft safety products.

Whether you support our war efforts in Iraq or not, everyone agrees that our troops deserve the best. Democrats will be running on an anti-Iraq “election ticket” but they dare not contest this point. Senator John Kerry stuck his hand in that hornets nest and witnessed first hand how defensive Americans are of our soldiers. The Democrats will tread lightly as they review the proposed bill in 2007 that requests an additional $160 billion for the war effort. They won’t roll over and approve the whole amount, but I feel they will compromise from a position of weakness. They don’t want to create the impression that the safety of our troops is secondary in any way.

On the other side of the aisle, President Bush is reviewing the alternatives and time tables for our strategic withdrawal. He has been steadfast in his commitment to finish what we (he) started. News reports from Iraq tell of escalating violence and they suggest that a civil war caused by religious conflict is possible. President Bush wants to squash this movement and he does not want to see our efforts fall apart at this stage. He is hinting that additional troops need to be deployed. In January he is going to reveal his plan and the world (terrorists included) will be listening. In my opinion he will increase our presence and justify it by saying that the effort will instill order, allow us to securely pass control over to the Iraqi Government and get our troops home safely. He is not going to back down.

These pieces of information are critical to the trade because AH is a defense contractor. Law enforcement and homeland security are minor revenue sources compared to military contracts. My opinion of the upcoming events needs to be well-founded or it will cost me. I believe the news that will come out in January will be bullish for AH. Bush will increase our presence with the promise of “handing the keys over” in 2008. Democrats will kick, scream and approve the request under protest so that the safety of our troops is not jeopardized.

Now let’s take a look at the fundamentals. AH has an incredible balance sheet. Total Current Assets exceed Total Liabilities by $5 per share. That means you could value Long-Term Assets at $0 and still have $5 per share left over. Obviously, the company has very little debt and the Long Term Assets have value. As you might imagine, revenues and net income have grown incredibly the last four years. The cash flow has been so strong that AH used it to acquire a truck manufacturer – Stewart & Stevenson and a safety restraint company – Schroth Safety Products. Given these actions, I suspect that company’s next purchase will be its own shares. Armor Holdings trades at a low 1-year forward P/E of 10.8. Apparently, the market has already discounted the end of the Iraqi war effort. Why else would a company with this type of growth and balance sheet be trading at such a low P/E?

Meanwhile, the contracts keep flowing in. On December 4th, AH signed a $649M Family of Medium Tactical Vehicle (FMTV) truck contract that will generate revenues into 2008. To put that into perspective, this one contract was bigger than last quarter’s revenues ($563M). Here is the real wild-card. AH is currently in the running for another huge contract as the Army looks to replace its fleet of Humvees. This contract will be a big one and it is called the Joint Light Tactical Vehicle (JLTV) program. There are two teams that are in the race. General Dyanmics/OshKosh Truck and Armor Holdings/Lockheed Martin. This contract could fuel earnings for years. AH has recently been awarded contracts to upgrade the current fleet of Humvees and their recent acquisition of Stewart & Stevenson should really help their chances.

On a fundamental basis, the stock is discounted and the JLTV contract could really boost earnings for years to come. It also seems that armored vehicles might be needed for border patrol. That will become a hot political issue.

Technically, the stock has not made much progress in two years. However, the company’s financials are much stronger with two years of cash flow under its belt. In the chart, the horizontal blue line shows resistance that dates back to 2005. Once the stock broke above it, it became support. That support has held strong this year. The blue take-over notation refers to Stewart & Stevenson and the market wanted to see how the pieces came together. The chart also includes a trend-line that extends back to March 2005. These two lines will help me evaluate the support and quantify risk. My conclusion is that the stock has two defined support levels $52 (trend-line) and $50 (horizontal support). Each of these levels should hold before they break and that will give me time to re-evaluate. If they are violated, my analysis was wrong and I need to exit the trade.
.
. 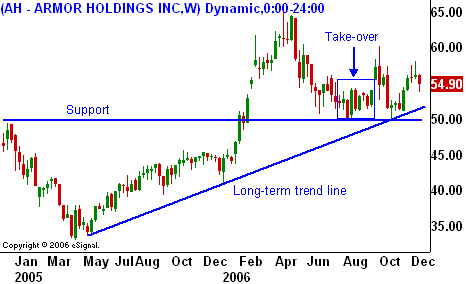 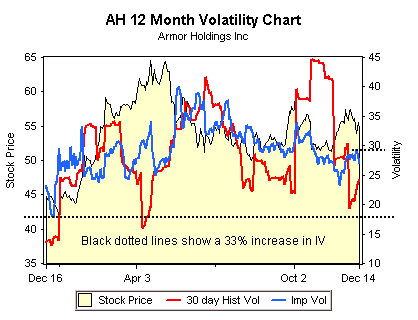 Those of you who’ve read my series of articles “How I Trade Options” know that I have to quantify my opinion. I feel that politically, not much will change in Iraq. Bush has already told reporters to back off. No announcement will be forthcoming until next year. When the plan is revealed, I believe our commitment will at least remain status quo. The stock price is discounted as if we are pulling out in 2007. I feel it is a good value here and support is nearby ($52 and $50). New contracts keep flowing in and the $650M FMTV did not even generate a spark. If the company gets the JLTV, the stock could easily go to $60 with a revenue stream that will last through 2008. The option implied volatilities have increased and there is a perception of increased risk. The overall stock market is in an uptrend and we have the “wind at our back”. Conclusion, I will play it safe, draw a line in the sand, take advantage of the increased IVs and commit to buying the stock at these levels.

My strategy is to sell the February $55 puts naked for a credit of $2.65 with the intent of buying the stock at $52.45. If the stock drops below $55 and I’m assigned, I will be obligated to buy the stock at $55. Since I sold the puts for $2.65, my actual cost for the shares is $52.45. That price is close to the trend line (first level of support). If all of my assumptions are still valid and the stock has simply pulled back because of nervous investors, I will consider selling covered calls against the shares of stock that are “put” to me. If the stock rallies above $55, it will be called away. I will be flat the stock and ahead by the two premiums (put and call) I’ve collected.

If the circumstances change materially and the stock drops, I will buy half of the position in at $52 and the other half at $50.

Notice how I have laid out the possible scenarios and I have outline my course of action for each. I include this in all of my OneOption Research Reports. It is very important for option traders to have a complete game plan before the position is established.

Let me conclude with a statistical perspective. I feel that the downside risk of the stock is $50 and that AH should find support there. At that point, the options would be worth $5 at expiration. In general, I’m risking $2.45 ($5.00 – $2.65 premium) to make $2.65. If my analysis is right half of the time, there is a positive expected value and the trade makes marginal sense. However, I really feel the stock will find support at $52 and I will have a chance to buy the puts in cheaper than $5 if that scenario unfolds. I also feel that there is a much greater likelihood that the stock will rally. My overall assessment is that there is a 33% chance that the stock will be below $55 and a 67% chance it will be above $55 at the end of February. Those assumptions yield a much better risk/reward ratio for the trade.

Remember, there are many pieces to this trade. My intent was to demonstrate how my opinion translates into an option strategy.

Preparing for a Market Reversal – The Detailed Process – By Hariseldon