Consumer debt is high, home prices are declining, inflation is eating away at disposable income and now unemployment is on the rise. There were only 18,000 new jobs in December and the unemployment rate climbed to 5%.

The FOMC does not meet until the end of the month and the market will be trying to second-guess Fed policy for the next few weeks. A .25% rate cut has already been factored into bond prices. Next week, the economic releases are fairly light and Friday’s bad news could fester.

Inflation is heating up and the Fed is painted into a corner. They may be forced to let this economic cycle run its course. If that transpires, you will see a spill-over effect from the subprime mortgage crisis as a new set of borrowers default. I don’t believe we will know the true extend of this cycle for many months.

This is an election year and the current polls favor the Democrats. Historically, the market declines during the first six months when a party change is expected. Politicians, economists and analysts are quick to place blame for today’s woes. Personally, I believe we are all individually responsible. I also don’t believe that future rate cuts will matter.

Over the last 17 years, our personal savings rate has dropped from 8% to zero. In fact, for the last two years our savings rate has been negative. How much longer can we expect to spend more than we make? On a fiscal basis, the government has done the same and lenders no longer hold out their hand.

The dollar has hit 30-year lows against most major currencies and our largest borrower (China) is spending its dollars to buy our banks ($5B Morgan Stanley) and invest with our Asset Managers ($3B Blackstone). It is not interested in our debt and they are diversifying away form it. Saudi Arabia has similar plans.

As you can see in this week’s chart, significant support levels have been breached and there is severe technical damage. The horizontal support level at SPY 146 is gone, the market has broken a five-year uptrend line and it is trading below its 200-day moving average. These are all significant developments and I believe we could test November’s lows Monday.

Japan tanked 4% on Friday and overseas markets are likely to follow our decline Sunday night. That will present a weak backdrop as trading resumes next week. 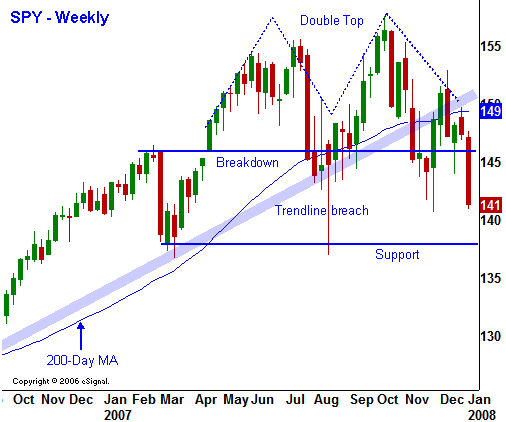