Today, there’s not much stock market action to report. Asian markets were flat while China is closed for holiday. European markets were also flat. Keep your option trading light.

Our market has been trading above and below yesterday’s close. McDonald’s posted good same-store sales and Amazon announced an aggressive share buyback program. Those two events provided a shot in the arm.

There were a few interesting events yesterday. First of all, the Bank of England lowered rates by a quarter-point. The move was widely expected and it shows a willingness to ease. Second of all, Deutsche Bank released earnings and they did not have any new sub-prime write-downs. This would be a huge positive if we are more than half-way through the crisis. The third event was the market’s recovery from a gap down below support near the open. The bears have the upper hand and they would typically have been able to sink the market like a 2-foot putt.

I dare not say that yesterday’s reversal signified a bottom. The volume was too light for me to jump to that conclusion.

As I look ahead, next week will be pretty light on the economic data front. Most of the information will come towards the end of the week. Chairman Bernanke will testify before Congress on Thursday and that will be the major market driver.

The earnings will also be fairly light and some of the big names are; General Motors, Coca-Cola, John Deere, Bidu, NVIDIA, Ingersoll-Rand and Chipotle Mexican Grill.

If you take out the capitulation low that immediately followed January expiration, the market sits at the low end of its one-month range. That tells me that next week’s expiration bias is to the downside. If the market starts to decline in an orderly manner, sell programs could fuel the drop.

If the market bounces strongly before the capitulation low can be tested, a solid, sustainable rally back to the SPY 144 level is likely. On the other hand, if the selling pressure accelerates and the SPY 125 support level gives in, we are headed for another down leg.

Personally, I feel support will hold. I am seeing some great values in the market. As confirmed by yesterday’s reversal, the bulls are getting just a little more aggressive at this stage of the game.

For today, expect a drift lower heading into the weekend and keep your powder dry. 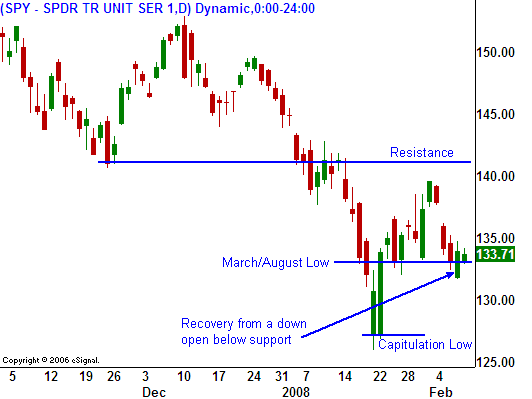