And just like that, bad news was good news. As I mentioned yesterday, the one thing that could save this stock market was positive news from the bond insurers. MBIA raised enough capital to maintain its AAA credit rating. Ambac is close.

This morning, the PPI came in at a very hot 1%. Analysts had been looking for a .4% rise in January. Home prices fell by more than 90% in the year 2007. These two depressing numbers weren’t able to generate selling pressure.

The market is much more interested in the credit ratings for the bond insurers. This is one small, but very significant area of uncertainty for financial institutions. If there is some resolution for the mortgage insurers, additional confidence might return to the market. Investors and Asset Managers can stomach a pullback; however, they can’t deal with the possibility of a financial collapse.

Tomorrow the market will have to deal with another round of economic news when the GDP is released. Chances are, it will show a marked slowdown in activity.

In the chart you can see that the wedge has been broken. Prices have moved above resistance at SPY 137. It is tempting to jump on the bandwagon; however, it is too early. We don’t even know if today’s rally will hold going into the close. In the chart, I have outlined a number of resistance levels.

Remember that just two days ago the market looked like it was going to break down. That’s how quickly things change. Oil, iron, gold, wheat, beef, fish, health insurance, hourly wages… all point to higher inflation and that was confirmed by a very hot CPI and PPI. This comes at a time when the Fed is lowering interest rates. I’ve heard an analyst foolishly argue that that a higher PPI has not translated into a higher CPI. That simply means that producers are absorbing the costs and their profits margins will decrease. Take your pick, less consumption due to higher prices or lower profits. Both are bad for the market. The headwinds are blowing strong.

That said, I have been looking for an oversold bounce. Don’t get to aggressive on this breakout. You should have excellent profits on the positions I’ve suggested. Scale out and sell into strength once the move looks like it has exhausted itself. Energy, agriculture and mining are the places to be. 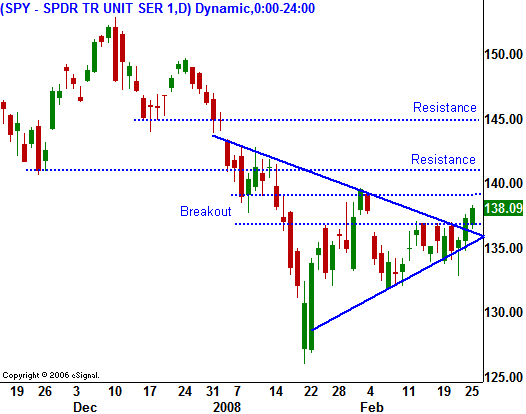