It is impossible a candy coat this stock market decline. Mortgage foreclosures are at a 20-year high and delinquency rates for all mortgage loans rose to 6% last quarter. In February, the economy shed 63,000 jobs and the numbers for December and January were revised down by 46,000. Higher unemployment will translate into greater loan defaults.

Financial institutions are under extreme pressure. New capital is dribbling in at an inflated price and that will hurt profits in the long run. In the short run, I expect write-downs to continue, albeit at a slower pace. Heads have rolled in the financial sector and the new CEOs have aggressively priced down assets so that they are not held responsible for mistakes made by the old regime. This morning, Lehman announced that it is laying off 5% of its workforce and they are battening down the hatches.

When you dissect the Unemployment Report from last Friday, you can see weakness across almost every sector. That was consistent with the Beige Book that was released last week. Eight of the 12 districts reported deteriorating economic conditions. There is a general slowdown across all industries and regions. Consistent with this information, the GDP and durable goods numbers came in weaker than expected.

Panic has hit the street and last week Trim Tabs reported that investors are pulling money out of the equity markets at an unprecedented level. During the month of February, equities had an outflow of $2 billion per day. Last week, CNBC reported that 12 major magazines featured cover stories on the bear market. This is a contrary indicator and it might explain why the market has been able to shoulder all of this horrible news.

On a temporary basis, the market is oversold. We broke through a key horizontal support level at SPY 132. Since then, and the bears have had a tough time landing a knockout punch. If the market retests the SPY 125 level and it finds huge support before we get to that level, we could see a massive short covering rally. Bearish speculators are confident and aggressive. On the other hand, if the bulls are not able to support the market, and we easily test the SPY 125 level, the market is likely to start its next down leg.

On an intermediate basis, we are in a bearish market. As I see it, there are only a few ways to play it. If the market does find a big “bid”, I believe you can get long commodity stocks. Take profits on them when the SPY reaches 138. Your next move will be to short the financials.

If the market drifts lower and it takes out the SPY 125 level, I would short stocks that have been in a very steady downtrend. Go small and look for candidates that have not had many short covering rallies. Publishers are one example of a very weak group. I don’t believe you can get as aggressive on a breakdown because the probability of a massive bear market rally exists. Selling into a rally that loses its momentum is the best play for the next few months. 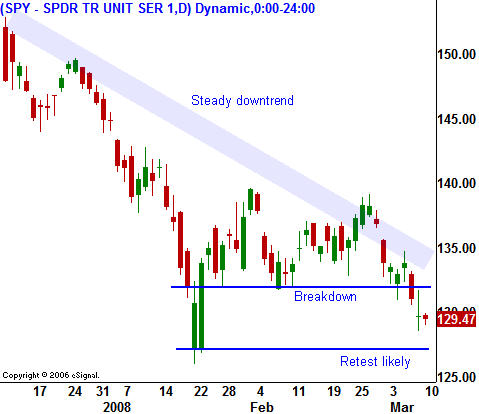