Financials Lead The Snap Back Rally – Option Traders – Wait For Follow Through.

Yesterday, the stock market pulled back hard on the news that J.P. Morgan Chase was going to buy Bear Stearns for two dollars a share. Just a few weeks ago, the stock was trading at $70. As the stock started to crumble last week, the CEO released a statement saying that its balance sheet was in good order. Conditions are changing at an alarming rate and investors are on the verge of panic.

Realizing the magnitude of the situation, the Fed stepped in over the weekend and it guaranteed $30 billion of BSC’s subprime loans to facilitate the takeover. They also lowered the discount rate by .25%, sending a clear signal to the financial markets that they were prepared to step in.

Financial stocks were trashed anyway ahead of their earnings. Investors wondered how big the write-downs would be and they questioned how legitimate the asset valuations are. In the case of Bear Stearns, an $80/share book value was sold for two dollars.

This morning, Goldman Sachs and Lehman Brothers posted much better than expected earnings. Goldman Sachs has largely avoided the subprime crisis and they were expected to post a decent number. However, Lehman was a giant question mark. They did take a $1.8 billion write-down; however, they posted earnings of $.81 per share or $489 million. All financial stocks have rebounded sharply on the news.

The PPI came in a little hotter than expected, but the market shrugged it off in advance of the FOMC announcement. A 1% Fed Funds rate cut is expected. If the Fed is accommodative, I believe the market might rally initially on the news. However, I believe this euphoria could end soon. The Fed will quickly run out of bullets at this pace and prior rate cuts have not generated much of a follow-through rally.

If the Fed cuts rates by less than 1%, I believe the market will give back some of its gains. While the Fed’s actions were needed, they still did not resolve the bigger issue. The number of foreclosures is at a 20 year high and they will continue to increase as the unemployment rate rises. Someone still has to pay the price for these poor credit decisions. As a taxpayer, I’m not overly excited about footing the bill for this “bubble”. However, if it helps us avoid a financial meltdown, I’m all for it. Unfortunately, our government continues to pile on the debt as the dollar sinks to new lows.

From a technical standpoint, the market successfully retested the lows. If it can follow through with a substantial rally, this will represent a new long-term support level. On the other hand, if the market can’t mount a sustained rally, there is more work to be done on the downside.

We are dead till the Fed. I would not suggest trading after the release today. Wait to see the overnight reaction. It will be more legitimate and it is likely to determine the next move. With the extreme volatility we’ve seen in the last few weeks, I suggest laying low and riding out this holiday shortened week. Quadruple witching will only add to the unpredictability of the market. 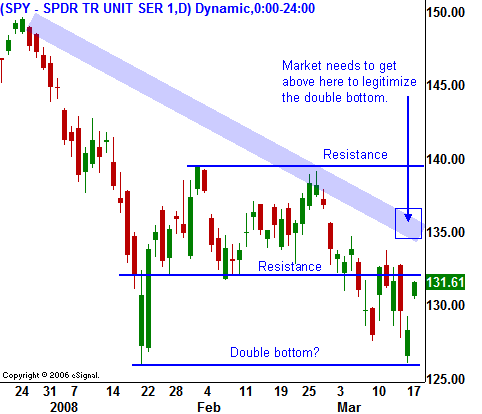