The news today is light. Overseas markets traded higher and that has provided a positive springboard for our market.

This week, first-quarter earnings kick off. The announcements are minor with the exception of DNA and GE. Genentech could fuel a lagging biotech sector as it guides higher. Its blockbuster drug (Avastin) was recently approved for the treatment of breast cancer. General Electric should provide a boost to industrial stocks. Among other areas of strength, turbine sales should be strong as power outages recently plagued South Africa and China.

Heading into next week, I fear that there is a little too much optimism in the financial sector. Granted, additional capital is flowing in that is a positive sign. However, the write-downs are substantial and top line improvement will be many months away as the unemployment rate moves higher. Earnings releases are heavily weighted towards the financial sector in the first two weeks.

The market momentum could push higher the rest of the week in the absence of major economic releases. As it gets closer to SPY 145, the headwinds will mount. It is getting ahead of itself and financial stocks will let some air out of the balloon next week.

I believe that taking profits is the way to go as we reach for SPY 145. That resistance is formed by a 5-year up trend line and the 200-day moving average. Any pullback near the SPY 130 level will be a buying opportunity. The market has established bona fide support and the bulls are getting more aggressive.

Commodity stocks are still leading the rally and other sectors need to participate. I believe tech and industrials represent a good value at current levels and those are potential areas of strength.
. 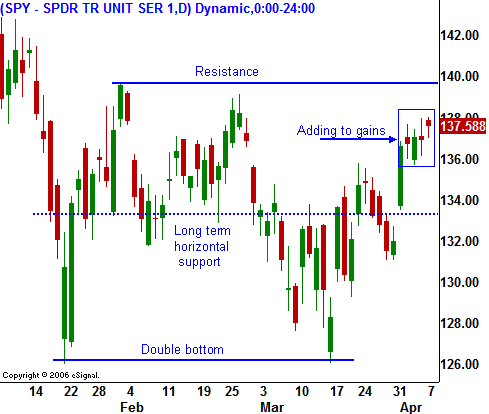