Market In No Man’s Land – Buy A Dip Or Buy A Breakout – Don’t Trade Options Here.

Yesterday, the market traded in a very tight range the entire day. It was able to hang on to last week’s gains and that was a victory for the bulls.

Overseas markets were generally mixed. China and India were higher and Japan and Europe were down.

Earnings were good, but the market is trading down. If I look at some of the best earnings releases (STLD, AKS, MCD, DD, CME, SII), the stocks are all trading lower. Obviously, good results were factored into the stock prices and once the news was released, some of the “fluff” was taken out.

Dismal housing results were released, but it did not weighed on the market. We were already trading lower before the numbers were released and poor housing numbers are expected. Median home prices fell 7.7% from a year ago and 18% of the homes that are in foreclosure have negative equity. Home sales dropped by 2% in the month of March.

Oil continues to climb and that is going to start weighing on our economy. Refineries are cutting back on production because they are barely making a profit due to high input costs. In an effort to reduce gasoline inventories, they are only at 80% of production. Gasoline supplies are already starting to decline and prices are likely to surge above $4 per gallon ahead of Memorial Day. It’s “Green Week” and environmentalists should be rejoicing. The only way to get Americans to change their gas guzzling ways is to hit them in the pocketbook.

We will get another round of earnings this afternoon and tomorrow morning. Stocks of interest include: BRCM, ILMN, NSC, SIAL, YHOO, YUM, ATI, BHP, BA, GD, ROK, SGP, R, UPS, WLP, and ROK. From that list, UPS is of greatest interest. Their guidance will give us a glimpse at economic activity this summer. Many are speculating that Yahoo will post a big number in an effort to attract a higher bid from Microsoft. That news is already factored into the stock and I don’t believe it will rally after the number. In fact, as I look at the list, the market could decline after this round of earnings. UPS has warned, Boeing is behind on its planes and defense contractors have been weakening. The rest of the companies could post solid numbers, but that is largely expected.

There aren’t any economic releases due out tomorrow. However, low oil inventories could push that commodity higher. Any relief in oil prices could spark an intraday rally.

The market is right up on a resistance level. I would wait for a pullback to get long. If by chance the market is able to close above SPY 140 this week, get long and trade small size. Be quick to take profits. The closer the market gets to SPY 144, the stronger the headwinds. A pullback to SPY 132 is an excellent buying opportunity. We have seen to large up gaps from that level in the last two weeks. In general, the earnings news was good today and I expect the market to be able to hold avoid a big decline. It is likely to drift lower and recover a bit this afternoon.

In today’s chart, you can see how well tech stocks have performed. They have broken out above intermediate-term resistance and they are strong relative to the S&P 500. The market will need participation from this sector if it is going to mount a sustained rally. 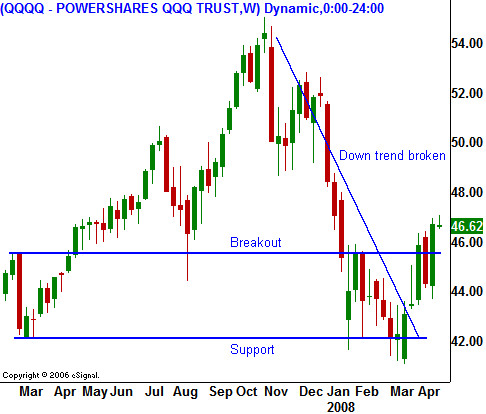