After two relatively quiet weeks of trading, we finally have something to sink our teeth into. With the exception of housing, the economic numbers have been coming out better than expected.

The FOMC lowered interest rates by .25% and the statements were unexpectedly dovish. They see continued credit concerns and they believe that inflation will moderate. They do not meet for eight weeks and effectively we have an interest rate pause. Currently, there is a 100% in probability built into bond prices that the Fed will raise by November.

Throughout the week, the dollar strengthened and that created selling pressure in commodities and commodity stocks. Wednesday’s oil inventories also showed a build and oil prices pulled back. Lower energy prices provided a relief market rally Thursday. Once commodity stocks find support, they will be a great investment.

For the time being, money is rotating into beaten down sectors. The QQQQ staged a nice breakout rally on Thursday and the market needs this sector if it is going to mount a sustained rally. The SPY also broke out above a key horizontal resistance level and it is trading above 140. Stocks that have been lagging are gaining traction.

Earnings have been meeting expectations and outside of the financial sector the growth rate has been healthy. We have the key elements for a sustained rally – low interest rates and earnings growth.

Now I need to temper this excitement. The Fed sees something that it does not like. There is no other explanation for dovish statements and actions. They lowered rates at a time when the market could have shouldered a pause and they increased the Term Auction Facility (TAF) by $25B and the currency swap line with the ECB by $20B on Friday.

Inflation is soaring and although the economic numbers beat expectations, they are weak. Non-farm payrolls were down 20k and that should not be construed as a positive event. In a survey conducted by Challenger Gray and Christmas, planned job cuts rose 68% in the last month to a 19-month high. Home prices continue to fall and consumer confidence is low. The foreclosure rate continues to rise at an accelerated pace and financial firms have taken massive write-downs.

The market is less than 10% from its all-time high, yet economic conditions are much worse than they were in October. Inflation is also much higher. Financial firms have taken huge write-downs and the capital they have raised has diluted ownership.

On a short-term basis I am bullish. As this rally approaches SPY 145 and I will get more bearish. I am buying heavy equipment, tech, and very selective commodity stocks. When the market tests 145, I will take profits and I will start selling OTM call credit spreads on stocks that are in a long-term downtrend but have recently bounced.

Next week, the economic calendar is pretty light. Monday, we will get the ISM services number. Perhaps the best market driver will come Wednesday. If oil inventories are higher than expected, a sell off in energy could provide impetus for the market.

The earnings scene has many releases, but very few stocks have the market cap to drive the action. The short-term momentum is to the upside and I suggest being long, but trading smaller than normal size. This move could be getting tired and buying a pullback makes much more sense. As the market rallies, be prudent and take profits. 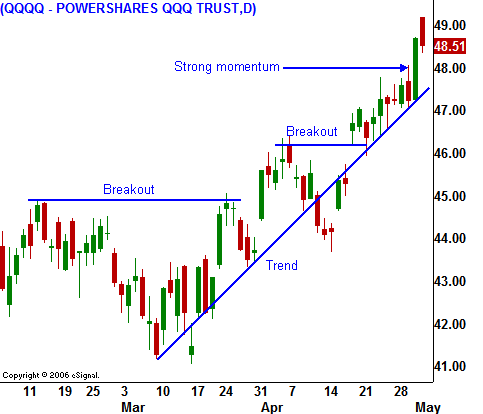