Yesterday, the market staged an impressive rally. It was able to recoup much of last week’s losses before running into a minor resistance at SPY 140.50. As you can see in today’s chart, tech stocks attempted to make a new relative high.

This morning, retail sales came out better than expected and the market jumped higher on the opened. The number met expectations, but if you strip out auto sales, it was up .4%. This number is a bit misleading since there was an extra calendar day in the comp. Wal-Mart released earnings and they hit their number. This also seems encouraging, however, they’re success is due to their deep discounting model. They are gaining market share due to tough economic conditions. They forecasted a tough second quarter and that is weighing on the entire retail sector.

Financial stocks are also struggling today and there have been a number of downgrades. The CEO of Citigroup stated that financial crisis might have passed, but the economic slowdown is just beginning. This sector will struggle to tread water.

Tomorrow, we will get a two key pieces of information. The CPI is likely to come in hot. Over the last three months, the PPI has far outpaced the CPI. It takes time for producers to pass and rising costs onto consumers and I believe in that inflation will start showing up in tomorrow’s number. The consensus estimate is a .3% rise. If inflation jumps higher, the Fed will be forced to raise rates sooner then they would like. A rally in energy prices after the release of the oil inventories number would also be damaging.

It is only fair to mention that a low CPI number and a built and oil inventories could spark a large rally. The probability of this scenario is fairly small given the trend in each.

As the market tries to extend the rally from its March low, it will continue to meet stiffer headwinds as it approaches SPY 145. It has come a long way and I see signs that this rally is getting tired. A nice wash out would be good for the bulls. A higher low would be established and the next rally would have even more strength.

I am selling out of the money call credit spreads in June (retail, financials, and casinos). Earnings season has passed and the Fed won’t meet for another 7 weeks. During this lull, the market will be searching for direction. Traders are selling out of the money options to take advantage of a tighter range and that is why the implied volatilities are dropping.

Keep your size small and wait for a pullback. This should be a very quiet trading day. A drift lower into the afternoon would confirm my suspicions of a tired market. 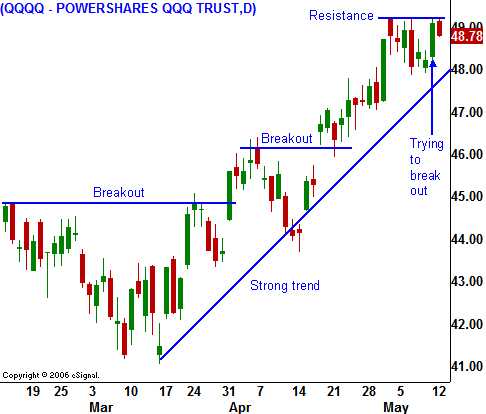