Lower Oil Is Supporting The Market Today – If That Changes – Sell Call Spreads.

The table was set for yesterday’s decline two weeks ago. As the market tried to push through resistance, we saw a dramatic one-day decline were the S&P 500 futures dropped 30 points. I’ve been referencing that event for the last two weeks because it signaled trouble. Huge down days that have come after a relative high have been a warning sign.

I was surprised to see how quickly the market recovered from that dip in the face of higher oil prices and weak economic news. When the market rallied up to major resistance at SPY 144 on Monday, it did so with relative ease. As I’ve been pointing out, it is a major technical resistance level and it was unlikely that we were going to push through it on the first attempt. However, in light, pre-holiday trading, anything can happen. As Monday wore on, profit-taking set in and most of the gains evaporated. That reversal paved the way for weakness Tuesday.

Tuesday morning, the PPI core rose at a faster than expected rate and the market reacted negatively. It looked like we might hit an air pocket, but buyers were able to bring the market back before things got ugly. Yesterday, the market tried to rally but it was immediately slapped down on the open. It traded lower on weak retail results and higher oil prices. I mentioned in yesterday’s commentary that the FOMC minutes would impact afternoon trading. A new intraday low was established just after the release and the market tumbled sharply.

This morning, initial jobless claims declined by 9000 and that is providing a nice backdrop for an early rally. From here in, the market will follow oil prices. If they maintain the current level, the market is likely to decline this afternoon. The only thing they can spark a rally heading into the weekend is lower oil prices.

The FOMC minutes revealed some major concerns. Inflation estimates were raised for this year, unemployment was revised upward and GDP estimates were lowered. Clearly, we are not out of the woods yet. The minutes also confirmed that the Fed is done easing.

I expect the market to be able to hold the SPY 138 level this week. Trading activity is going to dry up as the weekend approaches. Next week, trading should also be fairly light. There will be a number of economic releases and they include consumer confidence, new home sales, durable goods, GDP, personal income and spending, the PCE deflator, Chicago PMI and consumer confidence. The earnings will be dominated by retail and Sears and Costco are two of the big names that will be posting results.

Given the Fed’s comments, I would expect weak economic numbers. Retail sales have been generally light and I would expect that to continue. The news will have a negative bias and the only thing that can prop this market up is a decline in energy prices.

I am still selling out of the money call credit spreads on financials, healthcare, retail and restaurants. The bid to the market has been strong and I don’t know where support will establish itself. I do know that there is heavy resistance at SPY 144 and this strategy will work well on stocks that have not been able to participate in the recent market rally. On a longer-term basis I am maintaining my “buy the dip” mentality. 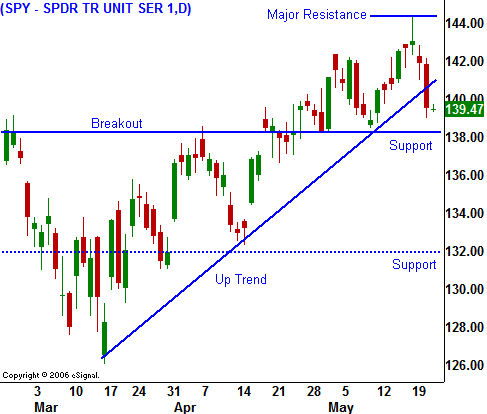