Inflation Is Mounting And It Is About To Hit Consumers – Keep Trading Light.

Yesterday, the market opened on its high and closed on its low. Takeover news and an oversold bounce got the week started on a positive note. However, once the early excitement subsided, the market tested the downside.

Trading will be very choppy ahead of the FOMC. This morning, the market declined on a weak consumer confidence number. It was the lowest reading in 16 years. After two hours of trading, the market is unchanged and it has rallied back. Traders will not take large positions ahead of tomorrow’s decision. The Fed is meeting for the first time in two months and traders are anxious to hear their comments.

I do not believe they will raise rates. However, they will shift to a hawkish bias. The market has already factored in a .25% rate hike in August and this rhetoric should not come as a surprise. The market is oversold and I am expecting a rally. If we get one, I will wait patiently for it to stall and then I will short stocks that are relatively weak.

Globally, central banks are tightening and rates are headed higher. That is putting upward pressure on our interest rates. The interest rate cuts by the Fed have not stimulated consumption. Banks have added a hefty risk premium and consumer interest rates (credit cards, mortgages) are as high as they were before the rate cuts. Banks have raised capital and the Fed is ready to move the Fed Funds rate higher. That will help to strengthen the dollar and a strong dollar is needed to fight inflation.

Make no mistake; inflation will be a major concern in the near future. Today, UPS lowered earnings guidance. High fuel costs are biting into profitability. Last week, FedEx announced similar conditions and both have seen demand fall off as they increase shipping prices. Dow Chemical stated that they will raise prices by 25%. This might seem like great news, but the CEO said that they are cutting production. They simply can’t raise prices enough to offset costs. As soon as they hike prices, the demand for their products declines. Dow Chemical will not produce at a loss and they would rather make less, raise their prices and maintain their profit margins. As inventories are depleted, replacement costs will rise. Ultimately, consumers will absorb some of the inflation.

This same theme is playing out in the airline industry. Continental is grounding 62 planes and they are laying off 3000 people. United Airlines is grounding 100 planes and they have laid off 1000 pilots (another 1400 pilots could be laid off as well). The airlines have to reduce the number of flights so that they can raise ticket prices. There is simply too much capacity and airlines are losing money hand over fist. In the next few months, tickets could easily double. This morning, Rio Tinto negotiated iron prices with China – they have doubled. Buildings, bridges, oil rigs, ships, trucks, autos and even washing machines will go up in price.

Tomorrow, the market will trade off of the durable goods number and oil inventories. Things will settle down ahead of the Fed’s decision and then the real fireworks will start. I expect a volatile reaction, but the “real move” might not show itself until Thursday. The market is oversold and in today’s chart I have referenced to large up gaps that occurred over a month ago. This level should attract buyers. If you get long after the release, stick with tech and commodity stocks. Keep them on a tight leash and take profits along the way. Once this bounce stalls, there will be longer term shorting opportunities. Major technical damage has been done on a 5-year SPY chart, a head and shoulders pattern has formed. The neckline has been broken and that is very bearish. 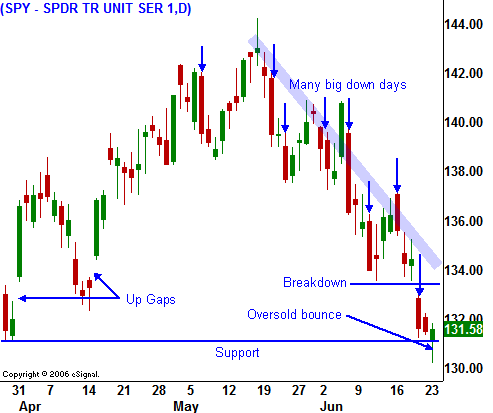