Yesterday, the market chopped around as expected. Nervous trading set in ahead of tomorrow’s Unemployment Report. Tuesday, the market tried the downside early and the S&P 500 futures were down 20 points at one time. The double bottom at SPY 126 held for the time being. Late in the afternoon, better than expected car sales from GM sparked a rally. Traders were also encouraged by a better-than-expected ISM manufacturing number. The market is deeply oversold and we are due for a bounce.

This morning, the market tried to rally early in the day. Some traders were fooled into thinking that yesterday’s reversal marked a capitulation low. Those who bought the open are regretting it now. I have not felt the panic to tell me that we are near a low and the VIX has not spiked to 30. The market feels very heavy today.

ADP released its employment index this morning and it showed that 79,000 jobs were cut in June. That is the largest drop since November 2002. ADP also reduced the May employment number by 15,000 jobs. The real concern should be that this report tends to overstate employment. If we get another spike in unemployment tomorrow, the market reaction will be severe. Heading into a three day weekend will, most investors will head to the sidelines and a decline could take as far below the double bottom support level.

Jobless claims have been creeping higher and the four-week average stands at 378,000. Continuing claims have also been on the rise and they are above 3 million. The consensus estimate for tomorrow’s number is a loss of 60,000 jobs and an unemployment rate a 5.4%. If the number is considerably worse, the market will tank. If the number is “in line”, I believe the market could rally. Another key piece of economic data is the ISM services number. It has been improving for three straight months and the consensus estimate is 51.0. Any number above 50 would indicate expansion.

Unemployment could generate another wave of foreclosures and this time it will spread beyond sub-prime.

Oil is trading higher after the inventory number. Given the dismal ADP number, higher oil and nervousness ahead of tomorrow’s number, I expect the market to decline today. If it really drops, that will build in a cushion for a horrible number tomorrow. I plan on covering some of my shorts today since it looks like this market is going to get hit hard.

If the market rallies in a halfhearted manner on tomorrow’s open, I would short that rally. Your indication would be a big jump in the S&P 500 futures that quickly fails once the market opens. That could happen on a number that is weak, but in line. If we get a big decline, I will stick with my remaining shorts. I am more willing to short into rallies because I can see which stocks are not participating.

My trading for the rest of the summer will focus on the short side and I will sell into rallies. 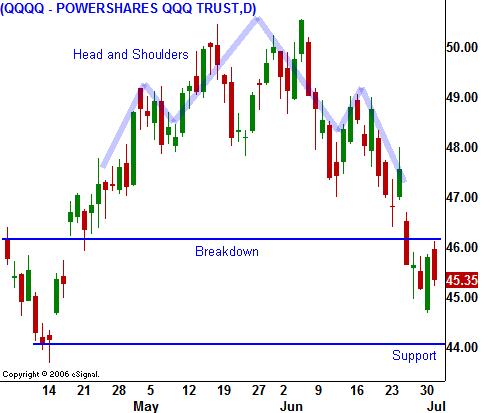