Yesterday, “bottom pickers” had their heads handed to them. Tuesday’s intraday reversal and strong rally into the bell was nothing more than a head fake. Wednesday morning, the market tried to follow through with back to back rallies. Prices gradually slipped throughout the day and by the close, the walls came tumbling down. The S&P 500 futures closed convincingly below the double bottom formed in March.

This morning, concerns over Fannie Mae and Freddie Mac have the financials reeling. Some analysts estimate that a $1 trillion government bailout might be needed. The US foreclosure filings jumped 53% in June (year-over-year) and one out of every 500 homes is now in default.

Lehman is also down considerably and all of the financial stocks are teetering on disaster. The Fed has fired all of its bullets and short of printing money and bailing firms out, there’s not much they can do. The recent decline in financial stocks will make it more expensive for them to attract new capital. Interest rates are headed higher around the globe and that will also increase the cost of capital.

Initial jobless claims rose less than expected and they only dropped by 58,000 last week. I wouldn’t read too much into this number until we see improvement over a period of weeks. Employment is a key to this economy and jobs are the only thing that can save us from a deep recession.

Retail sales figures came in better than expected and the rebate checks are still filtering in. Over 62% of the retailers reported figures that topped analysts estimates and 38% fell short. Once that stimulus is gone, retailers will be headed for lean times.

Panic is starting to set in and there won’t be a white knight that rides in to save the day. Interest rate cuts, discount window cuts, collateralized loans to financial institutions and rebate checks have all been used. I don’t view bailouts as a white knight since we all end up paying for poor investment decisions made by others.

The market is in a downtrend and it will continue. Along the way, we can expect a number of bear market rallies. They can be quite strong and the bounce that started in March is a good example. We will not see that move until the market has plunged intraday and it reverses. Then, we need to see follow-through buying for at least two days. Once that happens, traders will lean on the capitulation low that was formed and they will gradually support the market.

We are very close to a nasty decline. Every rally is met by selling and yesterday’s price action was unnerving. There is two-year support at SPY 123 (the low from 2006). A possible scenario is that we drop below that level and close above it intraday. With the current momentum, that would have to happen soon. Earnings season will kick off with the financials and it is possible that the banks will hold up since they are already priced for disaster. If that unfolds, we could see our short term rally.

Longer term support is at SPY 115. That would represent a 25% pullback from the high. The market formed a high at SPY 115 early in 2004 and it took the entire year to get through that level. Late in 2005, the market came back to test that level before it made its next leg up. That makes this a significant horizontal support level.

I am bearish and I am looking for a better entry point to get short – so is everyone else. Any bounce will need to be convincing (many days) to shake out the shorts. As it stands, the brief one-day rallies won’t shake any one out and the decline will continue. 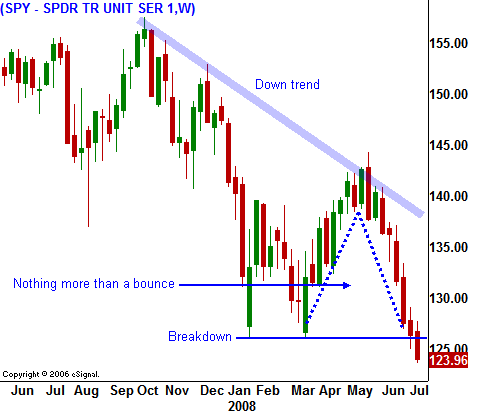