Earnings, Ecomomic Releases and Option Expiration – Here’s What To Watch!

Last week, financial institutions took a beating as fear spread throughout the sector. Fannie Mae and Freddie Mac both traded as if they were going under. Over the weekend, the government stepped in to rescue the agencies. In an unprecedented move, the government stated that they would go as far as buying equity in the agencies. This helped to calm stormy waters and the market jumped higher on the open.

Many foreign banks are heavily invested in these two mortgage agencies and a “fail” would have had global repercussions. Asia alone holds almost $1 trillion worth of their mortgage backed bonds.

Earnings this week will be dominated by financial stocks. Similar to last quarter, worst-case scenarios have been priced in. I believe that these stocks will not decline after they post their numbers and there is even a slight chance that they will rally. In April, the market moved higher as the financial stocks released dismal results.

Last week, GE was able to meet estimates. Global infrastructure continues to be an area of strength and these stocks should farewell this earnings season. The market did not like its conservative guidance and the stock was relatively flat after the release.

There will be a broad mix of earnings from all of the sectors and we should get a good feel for the upcoming quarter after this week. I will be looking at profit margins and I expect them to be lower since firms have not been able to pass on higher costs. I am also interested in the projections for next quarter and for the entire year.

This will also be an active week for economic news. Tomorrow, we will get retail sales and PPI. I am expecting a decent number from retail sales since the rebate checks are still be spent. However, I would short any rally in this sector since I believe consumer spending will drop off sharply due to high gasoline prices and rising unemployment. The PPI has been coming in “hot” and I’m expecting that to continue. Wednesday, the CPI will be released. Producers have gradually started to pass on higher costs and I suspect that the core rate might move higher. If that materializes, the market will have a negative reaction. Wednesday afternoon, the FOMC minutes will be released. If the Fed has shifted its focus to inflation, the market will have a negative reaction because it means that higher interest rates are right around the corner. Thursday, traders will be watching initial jobless claims. Traders want to see if last week’s better than expected number was a fluke, or if labor conditions might be improving.

The market is tough to call this week. On one hand, if we get decent inflation numbers, some positive news from the financial sector and if the Fed keeps the economy as its priority, we might see a rally off of this support level that was established in January and March. Last Friday, we saw the market rebound off of its lows when the VIX spiked to 30 and backed off. These were positive signs. On the other hand, if the inflation numbers are “hot”, the Fed has shifted its focus to inflation and companies are issuing weak guidance, we could see a large decline. This scenario is more concerning since it is an option expiration week. The market is on its one-month low and option related sell programs could push the market lower.

The take away is that uncertainty is creating a low probability trading environment. We are in no man’s land and I won’t trade this market until I see one of two events. If the market stages a huge decline, I will be looking for a capitulation low and an intraday reversal. I will establish long positions on that rally and I will hang onto them if I see two or three days of follow-through. When trading the long side, you need to take profits quickly. If we never see the capitulation and the market rallies hard this week, I will be looking for signs that the rally is stalling. I would be surprised to see it get back to SPY 133 and I feel that is an excellent level to start shorting.

The market could not hold the gains from early today and last week’s mini-capitulation is not convincing enough to force the shorts to cover. I feel that the market will probe for support and a decline is more likely. As long as oil stays above $140, any rally will be short-lived. 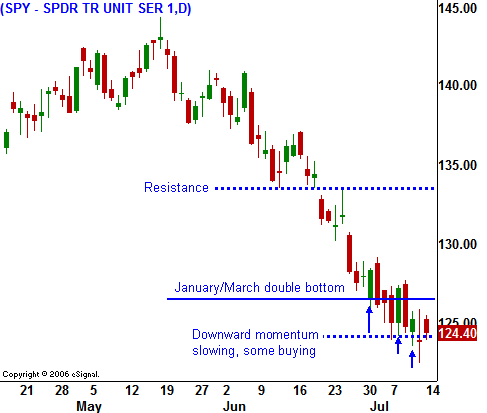