Yesterday, the market had a nice head of steam as it tried to close above minor resistance at SPY 129.50. During early trading, buyers were able to sustain a rally and it looked like we might be off to the races. By late afternoon, the rally weakened and we closed off of the highs. The market continues to search for direction and the action is very choppy. Expect more of the same during a light news week as traders take time off.

This morning, financial stocks are weighing on the market. UBS is taking a $5 billion write-down; Wachovia reported a $9 billion loss and J.P. Morgan Chase lost $1.5 billion. Citigroup warned that Bank of America might cut its dividend (largely expected) and Deutsche Bank downgraded Goldman Sachs. Credit worries are far from over and the losses will continue as unemployment climbs.

Oil prices continue to decline even though disruptions in Georgia are likely. The Agriculture Department reported big corn and bean crops this morning and grain prices are dropping. The floods from this spring were not as devastating as originally thought. Both of these factors should ease inflation and I don’t believe Thursday’s CPI number will pack much of a punch.

A weak US dollar helped to push exports higher and the trade gap shrank in June. It totaled $56.8 billion, down from $59.2 billion in May. Given the high price of oil (a major import for the US), this is amazing and it is a positive development. The recent dollar rally could prevent us from chipping away at the trade deficit in future months.

If the market can hang on to the breakout above SPY 129.50, I suggest staying long tech in small size. In today’s chart, you can see how this sector is leading the market bounce. I am still skeptical of this rally since we are “going against the grain”. The intermediate-term trend is down.

For today, the market will have a tough time recovering from early weakness. European and Asian markets were down 1% and the A/D is a negative 1:2. During expiration week, traders tend to follow strong intraday trends and if we make a new low this afternoon, option traders could add to the selling momentum. Consequently, I would favor the downside today.

Keep your size small and if the market breaks below SPY 129.50, go flat. This is a market to avoid. Don’t burn your trading capital by trading in this low probability environment. 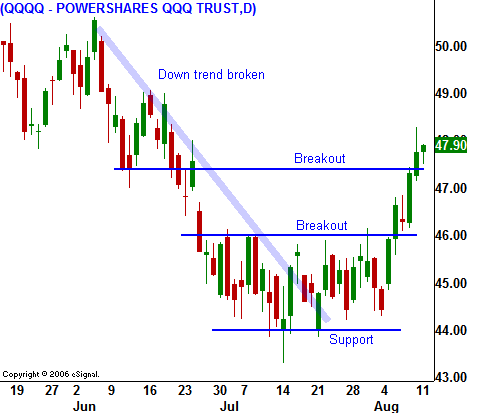