This Is Going To Be Reolved This Week – Buy AIG and Buy SPY Puts!

This weekend, the government decided NOT to bail out an ailing financial institution. Lehman could not find a buyer and risk capital is very expensive (if not impossible) to come by. AIG is currently trying to secure $75 billion to maintain its credit rating. The Fed has asked Goldman Sachs and Morgan Stanley to help. It’s unlikely that they will provide the capital, but they might be able to spark interest. This company has $1T in assets.

This situation will be resolved one way or the other in the next day or two. Either AIG will be a great bargain or it will go bust. This insurance company employs 116,000 people worldwide and if it goes down, the market will tank.

Two weeks ago, Bill Gross of PIMCO (world’s largest bondholder) said he was buying up Freddie Mac and Fannie Mae bonds. The government already committed to bailing them out, they just hadn’t formailized it. This was a sure bet for him and he was getting in at a nice price. Traders misinterpreted the good auctions as a sign that capital was ready to return to the market. Now that the Fed has stopped back-stopping financial firms, no one wants to take the risk.

Over the weekend, Bank of America bought Merrill Lynch. Although the two companies denied it, “the street” suspects that the deal was forced to by the Fed. They did not want another huge investment banker to fail and the noose was already around their neck last Friday.

In an unprecedented move, the Fed is allowing financial institutions to pledge equities as collateral. In essence, our government has become a shareholder. In the last year they have lowered the Fed Funds rate, opened up the discount window, accepted mortgages for collateralized loans, provided a backstop for Bear Stearns, lowered reserve requirements for GSE’s, provided a tax rebate, given investment banks access to liquidity and bailed out Fannie Mae and Freddie Mac. The FOMC meets today and they know they are out of bullets. They can reduce interest rates, but it won’t do much good.

This financial crisis is going to finally play itself out. Cash is king and no one wants to take risk if this house of cards is ready to fall. Every month it seemed like the Fed would pull another rabbit out of its hat – they’re done.

As financial institutions fail, there is a cascading affect. They are all inter-dependent and they have OTC hedges, insurance and investments in each other. Right now, value means nothing. They need to sell what they can to raise cash.

I have been looking for asset rotation the last two months and there isn’t any. Normally, as one sector declines, the money flows into another. Energy stocks have been pounded and there is not one sector that has attracted the capital. That means that money is leaving the market. The same is true of global markets. The money is flowing out everywhere.

I am currently buying shares of AIG and I am buying SPY puts. One of these two trades is going to make a lot of money. 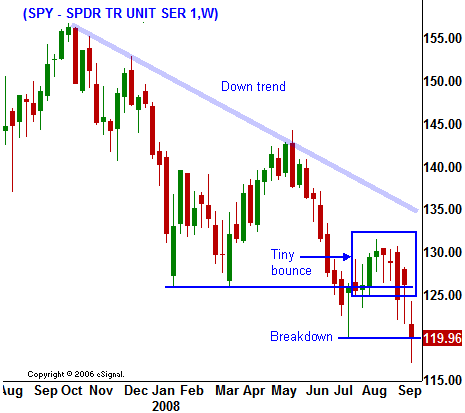