The Fed pulled another rabbit out of his hat. Legislators are drafting a plan to bail out troubled financial firms. They are pumping massive amounts of money into the financial system and they have prohibited the short selling of financial stocks. All of this comes on the eve of option expiration and this is the third time in the last year that material events have been timed this way. I’m sure the Fed feels that it is un-American to short and they don’t mind screwing traders who bet against the market. If it sounds like sour grapes, it’s not. I did not get caught short in this market.

If the Fed would have simply disclosed the possibility for such a bailout last week, billions of dollars in shareholder equity could have been saved. Market volatility does little to instill confidence and we would not have seen a dramatic plunge or rally this week. There is a chance that they weren’t prepared to do this. They reluctantly bailed out AIG and after Lehman’s demise they signaled that the bailouts were over. It’s possible they are flying by the seat of their pants. In either case, this has been handled very poorly.

The Fed had to step in and we were on the brink of a financial meltdown. When money markets (a cash equivalent) start failing, you have an enormous problem and a possible run on banks. I don’t like the fact that taxpayers will once again pay for the mistakes of large corporations, but a financial collapse would have been unbearable.

It angers me to hear that traders are being blamed for the problem. Regulators have not enforced naked short selling by institutions and that’s wrong – the rest of us have to locate the stock before we can short. If they want to reinstate the up-tick rule, fine. This won’t keep stocks from declining; it will just make the drop a little more orderly.

I heard Cramer use the term “financial terrorism” yesterday as if there were some Muslim plot to destroy our financial system. Give me a %^&* break. The Arab nations are growing their economies and they are very dependent on our well-being. They hold tremendous assets in the United States and they have been a huge source of capital for financial institutions. The people with enough money to wreak havoc have a vested interest in seeing us succeed. They also have their money in major banks around the world and all of them would have collapsed if this continued. Foreign central banks know this and they also flooded the market with money!

Can we please stop blaming everyone else for our desire to live beyond our means?

I don’t suppose that the financial institutions themselves could be to blame. They have constructed complex derivative products that can’t be priced, they have overleveraged themselves and they have made horrible lending decisions. They can’t even evaluate their own situations so they are reluctant to trade with other firms that might have similar exposure.

The key to the solution is fiscal responsibility. The government needs to raise taxes to pay down its mountain of debt and individuals need to stay employed and save. This will take many years to resolve if we start now and it will be painful. I feel Japan serves as an example and after 20 years, their market is still a third of where it was in 1989.

We are “fat” and there is not a magic pill that will make us thin. If we eat right and break a sweat, we’ll be ok. We’ve just survived a hear attack. I hope we learn from it and change our ways.

The problems that existed yesterday are still present and today’s rally had more to do with short covering than anything else. Once this move runs its course (and that could end today), this will be a shorting opportunity. I am shorting stock in small size right now. The Market Makers widened the option bid/ask spread and you could drive a truck through them. I was fighting a $.40 bid ask spread on SPY options on the open this morning and they are typically $.10 wide. In stocks, I was seeing markets that were $2-$3 wide. Keep your trading small and wait for some of this volatility to ease. 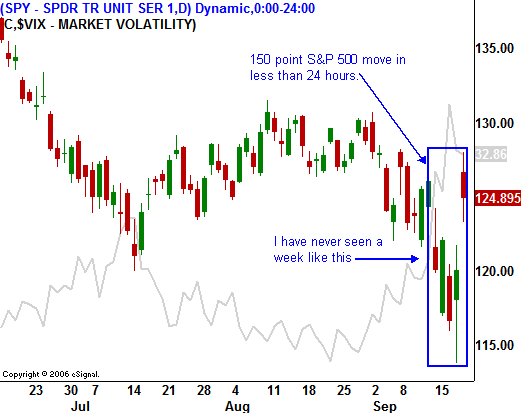