The TARP Bailout Will Get Passed – There Is Too Much At Stake!

Congress needs to approve the bailout now and hammer out the details while it raises capital. The funding is so large that it will have to be done in stages. Credit markets are locking up and the situation is dire. Fundamentally sound companies are having difficulty raising credit to fund basic day-to-day operations.

President Bush felt compelled to reassure the markets and in his two-minute speech today, he said a deal will get done. Warren Buffett staked $5 billion on the likelihood that it will be passed. He said that he would not have invested in Goldman Sachs if he did not believe a finalize plan was imminent. The Fed Chairman and the Treasury Secretary made a plea before Congress. They left no doubt that this situation is urgent and it needs to be resolved immediately.

The markets rallied prematurely on rumors that a bailout had been finalized. If politicians had tempered their excitement and waited for the ink to dry, this market whipsaw could have been avoided. The timeline has always been to get something done this weekend and there was no need to raise false hopes of an overnight approval. Now, traders and the financial world are wondering if this has become a partisan issue.

Time is of essence and any delay will raise fear. The world is watching. If both parties can’t come together on an issue of this magnitude, it will not bode well for the future.

RIMM missed its number and the stock is getting pounded. It is dragging the rest of the tech sector lower and it is weighing on the market.

We are likely to see a relief rally Monday once the bailout is finalized. End-of-month fund buying will also lend support to the market. Once that is rally runs its course, a nice shorting opportunity will present itself. The Unemployment Report will stifle any rally and the downtrend will resume.

Don’t get too cute with the rally. The better trade will come on the downside. The market will survive this heart attack, but it is far from healthy. 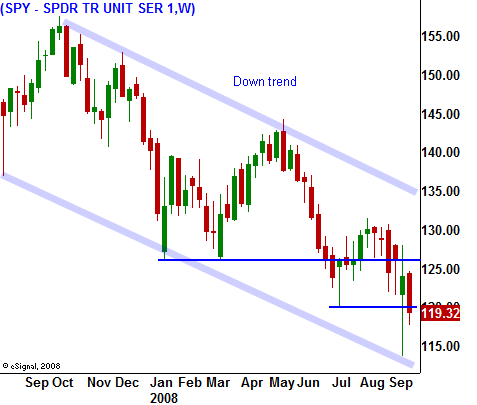