Trade The Rally In Small Size And Remember You Are Only Trading A Bounce!

In the last two weeks, the market has been able to shoulder bad news. Durable goods orders, the GDP and the Unemployment Report all came in below expectations. The Fed’s Beige Book confirmed these numbers and economic weakness was found across the country.

Last Tuesday and Wednesday, the market declined early on negative news and it reversed by the end of the day. Friday, a horrific unemployment number dragged the S&P 500 futures down 30 points. Analysts had expected 300,000 job losses and we actually lost 533,000 jobs, the biggest one-month spike in 34 years. The unemployment rate rose to 6.7%, the highest level since 1993. Once again, the market established early lows and it rallied the rest of the day to finish 30 points into positive territory.

In today’s chart you can see that the down trend line has been broken. SPY 85 represents a solid support level and next resistance is at SPY 100. If the market can convincingly get through 100, it might spark enough short covering to fill in the gap and rally to 110. While I feel that is a stretch, bear market rallies can be violent and they can exceed expectations. From its September high, the market was down 40% in less than three months. This deeply oversold condition could result in a big snap back rally. Year-end strength will help and portfolio managers will try to “goose” the market. They want to “dress-up” their performance as much as possible.

Analysts believe that a bailout plan for the “Big Three” could happen this afternoon. I believe that will fuel this market higher. That reaction is short-term in nature and a few weeks or a few months down the line, we will shift our focus to the mountain of debt our nation has created.

There aren’t any economic releases that will drive the market this week and earnings releases are also very limited.

I can’t embrace this rally to any large degree because I feel that a great deal of pain lies ahead. I am playing this rally in a very small way and I hope we get a rocket shot up to SPY 110. If we do, it will set up a fantastic shorting opportunity. As I’ve been pointing out for weeks, the best current strategy is naked put writing. Even with a marginal rally, the implied volatilities will collapse and your puts will be out of harm’s way. If you must get long, trade the underlying (not expensive options) and use stops. 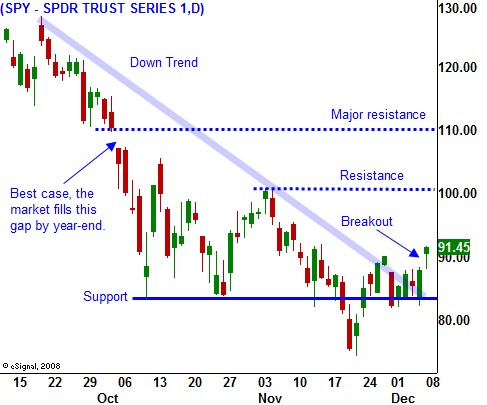