A Santa Claus Rally or Bust. Today’s Price Action Will Send A Message!

Today, we will see if the gradual drift lower that started last week will stall. Traditionally, the market rallys the day after Christmas and that move continues into year end. This is known as the Santa Claus rally.

The economic news this week has not been good, but poor results were expected. Durable goods orders were down big and GDP was weak.

Today, retailers posted miserable results and total holiday sales excluding autos were down 5.5% to 8%. In September, the National Retail Federation predicted a 2.2% increase in holiday sales. One bright spot is online retailers. Amazon announced its best holiday season ever. The sales that have been made are at deeply discounted prices and profit margins will suffer. The high-end retailers posted the worst results.

Japan posted its largest decline in industrial output ever. It fell 8.1% and the second largest economy in the world is bracing itself for a prolonged recession.

Earnings and economic releases are light next week and there is nothing to stand in the way of a small rally. It will be interesting to see if the cash on the sidelines will be put to use. Even a small amount of buying can fuel the market in light holiday trading. The market needs to get back to resistance at SPY 91 or 85 support will fail. If a Santa Claus rally does not materialize, that would be bearish for next year. It demonstrates a complete lack of interest in stocks and the lows from November will be tested in the next few weeks.

I am long-term bearish, but I do believe that we will see a nice little rally. Investors and hedge funds have moved to the sidelines and much of the selling pressure has been exhausted.

As we wait to see which scenario plays out, selling out of the money puts on strong stocks is a good approach. I doubt that we will see a major decline in the next two weeks. Time decay and a collapse in implied volatility will work in the favor of this strategy. 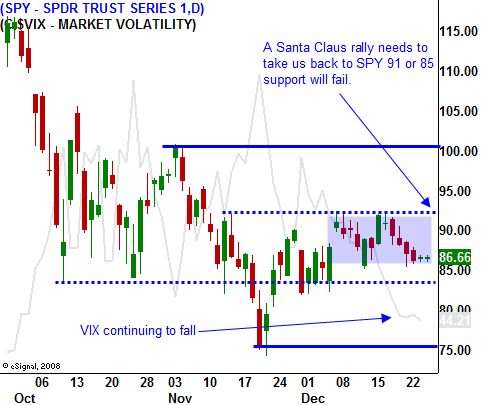