Tight Market Range With VIX Holding Up Could Spell Trouble!

Yesterday, the market continued its drift lower and it bounced just above key support at SPY 85. Trading activity is light and I don’t put much credence into the decline or the reversal. Overseas markets had a bullish bias and Europe posted small gains. Today, the market is continuing the upside momentum from yesterday’s reversal.

Consumer confidence fell to a record low in December as unemployment dampened spirits. The index fell to 38.0 from 44.7 in November.

This lack of confidence has already been reflected in weak retail sales. Mall vacancy rates could rise above 7% and rental rates are expected to drop by 4 to 5%. The ICSC predicted that 148,000 retail stores would close in 2008 and 73,000 would do so in the first half of 2009.

Until the employment situation improves, the chances for a sustained turnaround are minimal. A week from Friday, the Unemployment Report will be released. Lackluster trading will persist with choppy two-sided action ahead of the number.

There are only a few days left for a Santa Claus rally to materialize. In light volume, anything can happen. However, if we were going to see a bounce, it would have already been taking hold.

The VIX has stopped falling while the market is trapped in a tight trading range. That is unusual and I expected the implied volatility to continue its decline. The fact that premiums are holding up tells me that the potential for a market decline lurks. If traders expected the market to stay flat or rally in the next few weeks, they would be draining (selling) premium. The fact that a Santa Claus rally has not materialized and the VIX has stayed elevated, signals trouble ahead.

I still like selling out of the money puts on strong stocks and I feel that the energy sector is particularly attractive. These stocks have been pounded due to hedge fund liquidation. Unrest in the Middle East should keep a bid to oil for the next few weeks. I have also read that China is importing as much oil as it can at these prices. 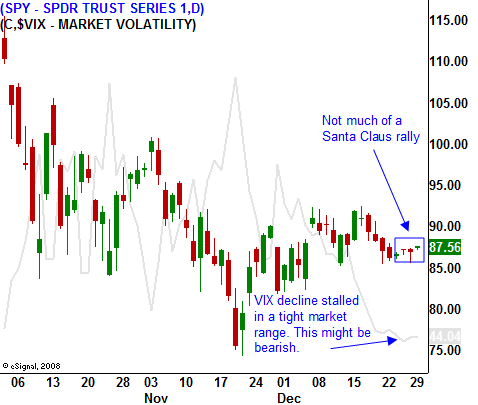