Sell Into This Rally – Take a Small Short Position Heading Into Friday!

Yesterday, the market was able to quickly overcome early weakness and it rallied back to unchanged for the day. The SPY 80 level does attract buyers. That level needs to hold or we will test SPY 75.

This will be the quietest day of the week. The economic releases were light and the earnings came in as expected. Manpower said that the demand for temporary staffing services declined rapidly across all of the geographies they operate in. UPS forecasted that a severe decline in economic activity around the world would result in sharply lower package and freight volumes. The company earned $.25 per share versus $2.52 in the same quarter a year ago. Furthermore, the company only provided guidance for the next quarter due to economic uncertainty.

I don’t see any major earnings releases that will drive the market after the close or before the open tomorrow. I will be watching MET to gauge the strength of this group. The market was fairly receptive to AFL’s earnings. The strongest stocks from this group could be a nice way to play a future financial rebound.

Tomorrow, we will get the ADP Employment Change. All eyes are on the employment scene and traders will dissect this number to try and get a jump on Friday’s Unemployment Report. Last month, ADP changed the way it estimates unemployment and their number overshot actual unemployment by a wide margin. In previous months, they have been known to under estimate unemployment. Thursday, the initial jobless claims will also be scrutinized.

In the last year, the market has declined ahead of the Unemployment Report. Given the downward sloping trend line in today’s chart and the breakdown below SPY 85, I believe we will test support at SPY 80 this week.

President Obama’s stimulus package has hit a snag in the Senate. Both parties are trying to rework the specifics. The resolution in coming weeks could support the market.

Earnings in general have been weak and 9 out of 10 sectors have missed their numbers. However, the market has been able to shoulder the news. Worst case scenarios have been priced in and a bid is gradually establishing itself. While this is a good sign, it is far from bullish. Buyers are looking for a deal and they will put money to work during steep declines. They are not willing to chase stocks and no one feels as though they are going to miss the next big rally.

I believe the market will rally slightly today. The action could get a little ugly tomorrow and Thursday ahead of the Unemployment Report. If the SPY 80 level can hold throughout the week, it bodes well for a nice bounce next week.

I have 75% of my desired risk naked put positions and I will not add until I see the SPY 80 level successfully defended in the coming days. If support holds, I will add the remaining 25%. If it fails, I will ratchet up my stops on the short put positions that I have. The key to the strategy is stock selection and the majority of my positions are doing quite well.

If you are a short-term trader, take a small short position and sell into today’s rally. Subscribers, focus on the stocks that are at the top of the Live Update table in the Daily Report. Plan to sell your short positions in the next 3 days. 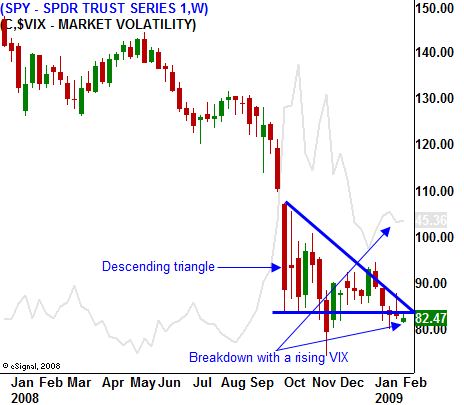