Yesterday, the market gave back its early gains as nervousness set in. Traders were preparing themselves for weak employment data and they dumped stocks near the close.

This morning, initial jobless claims jumped to a 26-year high. Initial claims for state unemployment insurance benefits rose 35,000 to a seasonally adjusted 626,000. This number was much higher than economists had expected. Continuing claims are climbing and 4.8 million Americans continue to draw unemployment benefits.

The initial shock pushed the market down on the open. In yesterday’s comments I predicted an early decline and a possible midday rally. The market has been able to shoulder bad news and it is rallying hard today. The second part of yesterday’s prediction was that the market would pull back near the close. That is still possible and I feel that much of this rally is short covering.

The market pattern of selling before the Unemployment Report has become too predictable. Traders got short and now the big money is putting the squeeze on.

Retail sales for January came in better than expected, but it was the second weakest same-store reading since Thompson Reuters started collecting the data in the year 2000. Consumers are trading down and the deep discounters are faring the best.

Earnings season continues and nine out of ten sectors have missed their estimates. Worst case scenarios are already reflected in stock prices and the market has been able to tread water during the releases. Now that the financials are in the rearview mirror, investors are breathing a little easier.

Tomorrow’s Unemployment Report will be ugly. The rate of acceleration is fast and it tells me that we could see double-digit unemployment before this economic cycle runs its course. After an initial decline Friday, I believe the market will find support at SPY 80. The promise of a stimulus package in the next two weeks could spark a short-term market rally next week.

In the chart, you can see a trading range has been established. There is choppy trading around the midpoint. Buyers are willing to pull out their wallets when the market reaches the low-end of the range. However, they are not willing to chase stocks and they do not feel that they will miss the next big rally. Sellers know that they have the long-term trend in their favor and the bad news keeps on coming. They are very comfortable selling stocks at the upper end of the range. Consequently, the market will continue to trade in this range until new information forces a breakout or a breakdown.

This is a great environment to sell naked equity puts on strong stocks that have reported earnings and have technical support. This strategy has served me well and I am capitalizing on time premium decay and an overall decline in option implied volatilities. I currently have 75% of my desired naked put risk exposure and I will add the remaining 25% tomorrow if SPY 80 holds. If it does not hold, I will raise my stops on my short put positions (most of which are very profitable). 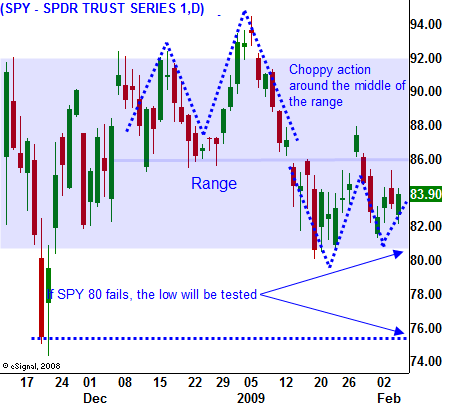