If SPY 80 Fails – The Market Will Start A Slow Drift Lower For Months!

A long three-day weekend gave traders plenty of time to think about the issues we face.

The stimulus package was approved and as suspected, the market declined on the news. It was crafted “on-the-fly” and political pressure forced Republicans to cave in. They did not want to be held responsible for further economic deterioration. The spending bill will do little to stimulate our economy or to produce jobs. It will increase our debt burden and it will weaken the dollar.

Fear that an Eastern European country would collapse sent international banking shares lower. A failed currency has a ripple effect that will be felt worldwide. Governments are trying to issue debt so that they can stimulate their economies. At some point, the cost of capital will go up to the point where the weakest player will default.

Domestically, we don’t have to look past our states to find similar situations. California has a $10 billion deficit and 20,000 state workers are on the brink of getting laid off. Illinois has a $5 billion deficit and today Kansas said that they will not be able to meet their payroll. Many states have already run through their unemployment funds and they will be asking for government assistance. I have only referenced a few examples, the problem spans from one coast to the other.

The Big Three will present their plans for survival to Congress today. Many feel that the negotiations with labor have not produced the cost savings needed for the companies to remain viable. Auto sales are at a 27-year low and those conditions will not improve any time soon. Oceans of cars need to be liquidated before any improvement in the industry can be expected.

The market has broken below critical support at SPY 80. This breakdown is likely to attract option expiration related selling this week. The VIX is rising and uncertainty is creeping back into the market.

Overseas markets lost 2.5% to 3% overnight and the selling pressure has spilled over to our market. The advance/decline is a negative 1:12. We are near the November lows and we need to see signs of support – today. In previous weeks, buyers have been willing to step in at these levels. The last hour of trading will be important and a close above SPY 80 is critical for the bulls.

I expect choppy trading today with two-sided action. There wasn’t any one news item to justify this big decline. Rather, the selling pressure resulted from the culmination of ongoing concerns. The market has overreacted and the possibility of a small reversal exists. If the bulls can hold this level, we have a good chance to move sideways over the next two months. If support fails, we are likely to drift lower until Q1 earnings season.

I have a full boat of short put positions, many of which are way out of the money. I have been picking my stocks fairly well. I do have a number of stocks that are near support levels and near the short strike price. With only three days left, I will watch these positions closely and I will shut them down if they go in the money. This retest was not completely unexpected. If support holds, this will present an excellent put writing opportunity for March. Before I reach that conclusion, I want to see evidence that buyers are stepping in and I would like to see the implied volatility rise so that I am adequately rewarded. I will be scaling into positions and there will be time to add. I am still long-term bearish and that sentiment is tempering my put writing activity. 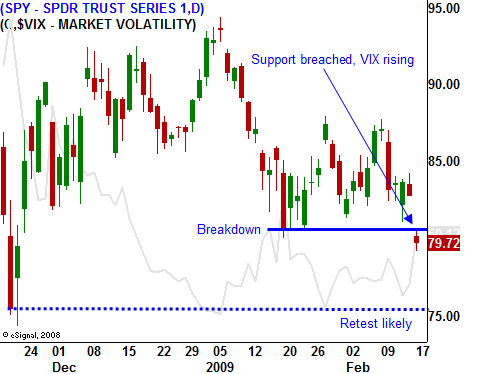