The Market Needs To Rest After A Huge Rally. Cyclical Stocks Are Ahead Of Themselves.

In a handful of days, the market has gone from a bearish breakdown to challenging a major breakout level. Earnings have been the catalyst and most companies are handily beating estimates.

The fireworks started last week with Goldman Sachs. However, Bank of America, Citigroup and J.P. Morgan Chase did not rally after they released their numbers. Today we are getting results from regional banks and they are trading lower after the release. The financial sector looks tired and it is far from out of the woods. Banks have issued stock and shareholders have been diluted. Residential and commercial real estate loans continue to be an issue and credit card default rates are on the rise.

Cyclical stocks are starting to rally and the move seems premature. Sales are down and cost-cutting has saved the bottom line. The promise of an economic recovery is driving these stocks higher. This sector seems vulnerable to a pullback.

Transportation stocks have also been moving higher. It stands to reason that an economic recovery would first be seen in trucking and rail.CSX and CNI reported declines in revenues and carloads in the 15% to 20% range. Old Dominion reported lower volumes last week. Federal Express and UPS have pushed back their forecast for an economic recovery.

Tech stocks have performed relatively well and they must lead any rally. After the close, we will hear from Apple, Yahoo and Seagate. I am expecting good results for all three, but the expectations are high and I don’t believe we will see a big rally after the number.

Initial jobless claims appear to be easing. This week that will be the big economic release. Typically, people don’t file for unemployment until they return from vacation. The Fourth of July holiday could have given us false hope as the numbers from that week came in much better than expected. Last week, initial claims were seasonally adjusted to reflect lower unemployment because of autoworker layoffs that happen every summer. Many analysts believe this adjustment to be incorrect since these jobs have been permanently lost. If jobless claims jump right back up this week, it might weigh on the market.

The Fed Chairman is being grilled by the House Financial Services Committee. They want to know the state of the economy. Traders are anxious to hear how the Fed will unwind its accommodative policies. Higher interest rates are the showstopper for this market rally. Bulls want to hear that the Fed is comfortable with its current policy.

Our national budget deficit will hit $2 trillion this year and the Treasury will issue a steady stream of bonds the rest of the year. If yields start to move higher (and they will) the market will have a hard time rallying. To date, the bond auctions have gone well and that helped to spark last week’s rally.

Earnings have been good, but top line growth is still an issue. Corporations have done a great job managing costs, but those cuts are not sustainable. In order for profits to move higher, we need to see an improvement in consumption. With the unemployment rate rising, that is unlikely.

The rest of the week will be highlighted by earnings releases and we will hear from every group and sector. After last week’s monster rally, I believe the market is ahead of itself.

I expect light trading and a range between SPY 89 and 96 the rest of the summer. The best trading strategy is to wait for earnings releases and to sell out of the money put spreads on strong companies with good results. The rallies are more furious than the declines and that is why I am favoring put credit spreads. I would also sell call credit spreads on companies that have rallied, but did not produce solid earnings. This is a market that lacks direction. Keep your size small. Better trading lies ahead in two months. 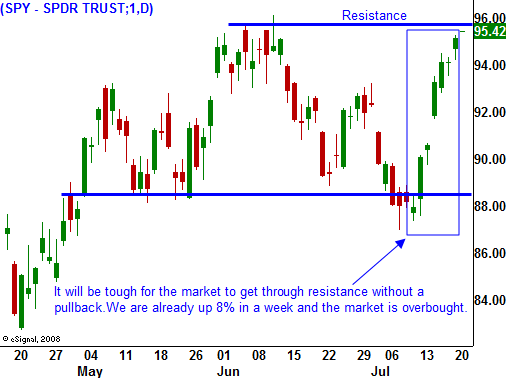