The Market Continues To Add To The Breakout – Get Long – Be Cautious!

The market continues to surge higher. It has broken through resistance at SPY 96 and it did not even retest that level before it staged its next rally. Buyers drove prices higher yesterday after a decent initial jobless claims number.

Bears had everything they could ask for on Wednesday (a 5% decline in Chinese stocks, worse than expected durable goods orders and a poor bond auction). When they were unable to generate selling pressure, buyers stepped in and reversed the decline. That paved the way for a big open on Thursday. Late in the day, prices pulled back.

This morning, GDP came in slightly better than expected. Analysts were looking for a decline of 1.5% and it only dropped 1% in Q2. While this number seemed good, there were concerns. Q1 GDP was revised down to a -6.4% from -5.5%. In the second quarter, consumer spending dropped 1.2%. Business spending improved from Q1, but it was still down 8.9% in the second quarter.

Chicago PMI came in slightly better than expected at 43.4. A number below 50 indicates economic contraction.

Next week is loaded with economic data. These releases will take center stage since the surprise element of earnings season has played out. Traders will key off of releases all week, but the real focus will be on Friday’s Unemployment Report. Judging from initial jobless claims during the last three weeks, the number should show signs of improvement. The market has been able to discount poor economic reports and look for the silver lining. As long as traders believe that a recovery is underway, the market will continue to rally until we see concrete evidence of further deterioration.

Interest rates could eventually stall this rally but not yet. Over $200 billion in bonds were issued this week and the auctions went relatively well. Interest rates have declined slightly and that makes stocks more attractive. Another series of bond auctions will take place in two weeks. These will be longer-term maturities and the showing will not be as robust. Investors do not want to lock-in long-term obligations at these low rates and they sense that yields will move higher in the future. The government is financing its debt with short-term maturities and a rise in long-term rates could be devastating down the road.

For now, the market has staged a significant breakout and bears are not going to get in front of this freight train. The volume has decreased and a passive approach to long positions is warranted. I am looking for stocks that have lagged the market and have produced solid earnings. Healthcare fits the bill. Health care reform has hit resistance and the impact is likely to be much less than initially expected. Focus on stocks that have a nice trend higher and have not gotten ahead of themselves. Sell out of the money puts to distance yourself from the action. If we do get a market pullback, don’t buy back your puts. You should maintain a “buy the dip” approach (unless the SPY drops below 96) and you should be prepared to take assignment.

For today, prices should move higher. I doubt that anyone will want to go into the weekend short. Advancers outnumber decliners by 2 to 1 and end-of-month fund buying should keep us in positive territory. I don’t believe we will see a big rally today. The market feels tired after a good week. 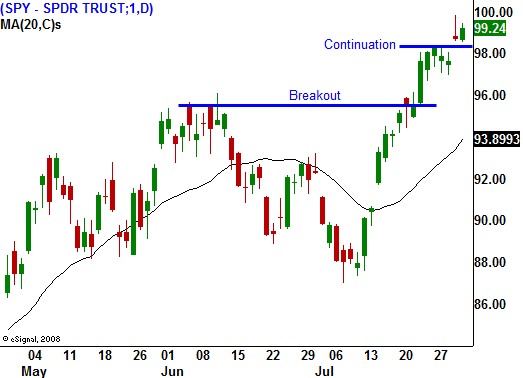