Volatility returned this week as trading volumes declined. Traders are searching for a catalyst in this directionless market and minor news events are having an exaggerated affect. The bottom line is that bulls still have the upper hand.

Earnings have been better than expected, interest rates are declining and the economic data is “less bad”. Over 70% of all companies have exceeded earnings estimates. In Q3 and Q4, the comps will get much easier and we will see considerable earnings growth. Last week, the FOMC extended the timeline for quantitative easing and they are committed to keeping interest rates low. New and existing home sales are improving as interest rates decline. The Unemployment Report from two weeks ago showed a drop in the unemployment rate and the four-week moving average for initial jobless claims has been falling. Jobs are critical to the economy and a slowdown in layoffs could signal a trough. All of these factors will keep a bid to the market.

All hopes for a global economic recovery have been pinned on China. Its market had fallen 20% in two weeks and that selling spilled over into our market this week. The Shanghai Index has climbed almost twice as much as the S&P 500 in the last seven months and it is vulnerable to profit taking. After an 80% run-up, I’m not surprised to see a pullback. Unlike the United States, China has a massive cash reserve and they can keep their stimulus going. Chinese stocks rebounded 4% overnight and it appears this decline is a temporary pullback.

The next two months are seasonally weak and extra caution should be used. Any pullback will represent an excellent buying opportunity for year-end.

Corporations have been quick to cut expenses and any uptick in demand will go right to the bottom line. Inventories are low and they need to be replenished. Unfortunately, businesses will be slow to rehire. They want to see bona-fide signs of a recovery before they add workers. This will bode well for earnings since they can get more productivity out of existing workers. However, it will weigh on the economy longer-term as unemployment continues to be an issue.

From my perspective, the market should have a clear path higher the rest of the year. We might see a temporary pullback as we often do in September and October. Low interest rates and earnings growth will be the catalyst for the final leg of this rally. As we head into next year, massive debt levels from the government down to the consumer will weigh on the market. Unemployment will be slow to recover and consumption will be negligible. Early next year I feel the market will be vulnerable to a decline after it makes a new relative high in December.

Since I am short-term bullish and long-term bearish, selling out of the money put spreads on strong stocks is the best approach. I’m able to keep my distance and take advantage of time premium decay and a decline in implied volatility. I am able to reevaluate my sentiment each month as options expire. As long as the SPY stays above 96, I will continue to use this strategy.

Bears have been declawed in the last few months and they will not stand in front of this freight train. This week they had a prime opportunity to push the market lower and they weren’t able to capitalize. Including today, there have been three back-to-back intraday reversals from early lows and that tells me that the bulls are clearly in control.

I expect the market to grind higher today and it could be helped by option expiration as traders leg out of hedged positions and “goose” the market. The A/D is a positive 3 to 1 and we have erased all of Monday’s losses.

Next week, durable goods orders should be helped by “cash for clunkers”. GDP improved considerably from Q1 two Q2 and next week we will get the next iteration of second-quarter activity. Both of these numbers should be positive for the market and they will be a focal point since earnings are winding down. Look for choppy action with a bullish bias. 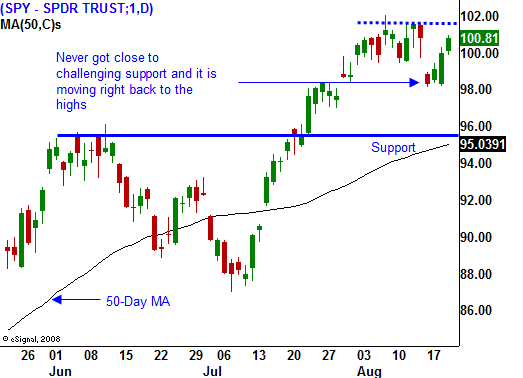