Yesterday, the market jumped to a new high for 2009. Great earnings from Intel and J.P. Morgan Chase fueled the rally. As I mentioned, option expiration buy programs would kick in and we would close near the high of the day.

This morning, Goldman Sachs blew the doors off of estimates. They had positive comments and they saw growth across many sectors. They have traditionally beat expectations and a big number was already priced in. After the news, the stock dropped five dollars. Citigroup also released earnings. It beat estimates as well and the stock is trading lower. Consumer loan losses continue to mount in the bank wrote off $8 billion in loans compared to $8.4 billion last quarter. J.P. Morgan also noted that consumer loan write-downs will continue to weigh on profits. This morning, CapitalOne said that credit card defaults in September rose to 9.77% from 9.32% in August.

In the early going, 80% of the companies that have released earnings have beaten estimates. However, after yesterday’s run-up, valuations seem stretched. When I bring up a six month chart of IBM and Google, I question how much more gas is left in the tank. They will both have to blow estimates away to hold these price levels.

As I mentioned yesterday, the reaction to better than expected earnings would give us an idea of how sustainable this rally is. The strongest earnings news will come during the first two weeks and if the market loses its momentum, a major resistance level will form. On a short-term basis, I would look to take profits on long positions today.

The economic news this morning did not have much of an impact on the market. Initial jobless claims came in at 514,000 when analysts had expected 520,000. That is a decent number and it continues to show improvement. Continuing claims dropped below 6 million and that is also a good sign. Inflation is low and the CPI came in at .2%, right in line with expectations. This means that the Fed will not be pressured to raise rates. Empire Manufacturing jumped to a new five-year high. Improvement came on surging new orders, shipments and employment in the sector. The Philly Fed index came in at 11.5 which is slightly lower than expectations.

Next week, the economic releases are fairly light. Building permits, housing starts, PPI, the Beige Book, initial claims, LEI and existing home sales round out the list. They are not likely to drive the market since earnings will again be the focal point.

I feel that IBM and Google will both beat after the close today, but they are likely to trade lower after the number. Bank of America and GE will release tomorrow morning and the results should be good. Monday after the close, Apple will release earnings. Unfortunately, I don’t believe we will see a rally in these stocks after the earnings.

Many cyclical stocks will release next week and they have rallied “on the come”. Results have been weak and they have moved higher on the notion that demand will improve. If we don’t see revenue growth and/or raised guidance, they will trade lower.

Earnings will be very solid and the comps from last year will be easy to beat. Interest rates will also remain low and that is another catalyst for this market. Valuations are getting stretched and the easy money has been made. Expect a “two steps forward – one step backwards” rally for the next two months. It’s very possible that we will fall into a tight trading range after a 60% rally from the low in March. The headwinds are starting to blow.

You have a chance to take profits on long positions today ahead of Google and IBM. I do not believe we will see a major decline today with those two mega-cap stocks about to release. I am sitting tight on my put credit spreads and they are safely out of play. I might buy some puts this afternoon as a speculative play. I won’t buy many, but I feel this rally is over extended. As earnings releases are posted next week, I will evaluate the price action and determined if I want to sell part of the money puts on strong stocks. 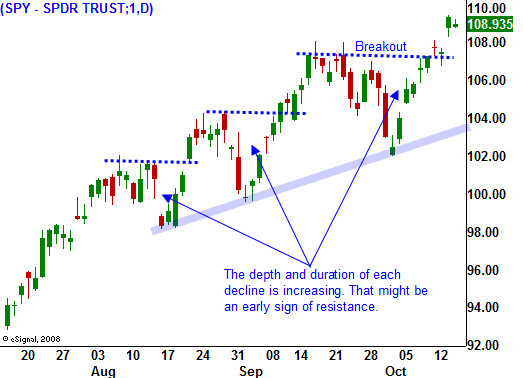