A Bid Is Returning to The Market. Have Your Longs Ready and Sell OTM Put Spreads On Support!

Yesterday, the market was able to sustain a nice bounce after two deals were announced. Berkshire Hathaway purchased Burlington Northern for a 30% premium and Black & Decker merged with Stanley Tools. The stock market has moved back above critical support at SPY 104. That represents the three month up trend line and if this rebound holds, we will have a higher low.

This morning, Republican election victories helped to generate early strength. That move was strengthened by a favorable ADP employment index. In the month of October, the private sector only lost 203,000 jobs compared to 227,000 jobs lost in September. Furthermore, September’s number was revised to reflect 30,000 more jobs than originally reported. The market rallied on the news and it eased concerns ahead of Friday’s Unemployment Report.

ISM services came in at 50.6. That was lower than last month’s 50.9 figure and it was well below analysts’ projections of 51.5. Nevertheless, it was the second month in a row that the service sector reflected economic growth. A number above 50 indicates expansion and more than 80% of our economic activity is tied to services. The market embraced the number and prices moved higher.

This afternoon, the FOMC will release its statement. I do not believe they will change a single word and that should be bullish. They will keep interest rates as low as possible until we distance ourselves from the financial crisis. I don’t believe the market will rally after the release. Traders will rationalize that the Fed has seen Friday’s Unemployment Report and that their “dovishness” could signal a weak number.

The market is climbing a “wall of worry”. Profit-taking as set in after a 60% rally from the March lows. We are in the final phase of this rally, but that does not mean that we will instantly reverse and head lower. Asset Managers are nibbling at this level and they want to support the market into year end. Wall Street wants to collect their bonus checks and they have a vested interest in propping prices up. Economic conditions continue to improve gradually, corporate earnings have been strong (80% have exceeded estimates) and interest rates remain low.

I still expect nervous trading ahead of the Unemployment Report. However, I am seeing a bid return to the market and I believe we will see a nice rally into year end. I also believe that the highs for 2009 are in. This is a great time to sell out of the money put credit spreads. Distance yourself from the action and focus on stocks that have maintained support during the recent market decline. Also look for companies that have been able to increase revenue and profits.

The market will be “dead till the Fed”. Watch for market support during the next few days and be ready to scale into bullish positions. 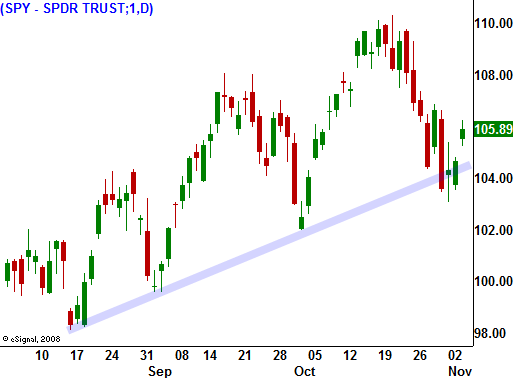