Thank You For Preserving Our Freedom! Expect Quiet Trading As We Honor Our Veterans.

Please take time to thank those who have sacrificed so much to protect freedom around the world!

Yesterday, the upward momentum was established early and the market surged higher. The volume was light and I interpret that as a lack of selling rather than intense buying. Resistance at the high of the year was tested this morning.

Foreign markets traded higher and that provided a springboard for our market this morning. Toll Brothers released very favorable earnings and that sparked optimism in the housing sector. Home prices continue to plummet and interest rates are at historical lows. Sooner or later, a trough to this housing cycle will be established. One good number from a single company does not constitute a bottom, but at least it’s a start.

As the market pushed through resistance this morning, profit-taking set in. Prices fell quickly and unless buyers step in, we have a chance for an intraday reversal. There isn’t much news to drive the market and in light volume, it can swing either way.

Tomorrow, initial jobless claims will be released. The number is very volatile week to week and most analysts follow the four-week moving average. Last week, initial jobless claims came in much better than expected. If by chance the number improves dramatically for the second straight week, we could have the catalyst we need to push this market through to new highs. This is not a likely outcome and I would not buy calls ahead of the number.

A more likely scenario is a pullback today after a huge run up yesterday. The market will quietly wait for the next piece of information. Banks are closed today and there is a big thirty-year bond auction tomorrow. The demand for long-term bonds has been weak and tomorrow’s auction might not go that well. This could weigh on the market.

Retailers will announce earnings towards the end of the week and those results are likely to drive trading. If Macy’s is any indication, these results might also weigh on the market. They posted decent results and beat expectations, but the stock is trading lower. The performance in this sector varies greatly from company to company and one data point is not enough to draw a meaningful conclusion.

Next week, there are many minor economic releases. I don’t believe any of them will result in a sustained move. From a technical standpoint, the market needs to close at a new high for the year this week. If it fails to, profit-taking will set in and this resistance level will be harder to penetrate.

On a banking holiday, expect light trading. Sellers have drawn a line in the sand and it will be difficult for the market to stage a rally this afternoon. On the other hand, an afternoon decline is possible if buyers start pulling their bids and profit-taking sets in. If you are long calls, take some profits. I am short put spreads and they are safely out of harm’s way. Now I just want time to pass and for the market to hold this level.

I still think you can sell out of the money put spreads on strong stocks. I would wait to see if we get a small pullback today or tomorrow before initiating new put credit spreads. 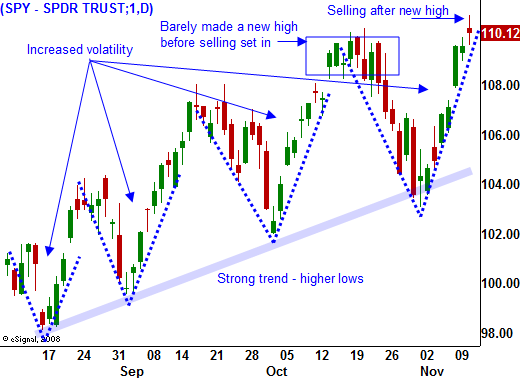